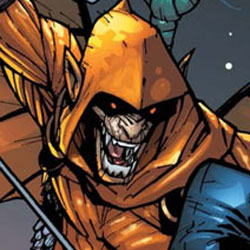 Time for Hobgoblin and Spider-Man to go toe to toe. Phil Ulrich has a slew of new tech and his Hobgoblin laugh, while Peter is decked out in a new Spider-suit. How many seconds before someone throws in a Tron reference? Counting down in 3… 2… 1… Previously in The Amazing Spider-Man: The Reverbium Stolen!? Spider-Man Suits Up in Sonic Spandex! Black Cat Blathers, But Boobies Distract! Wilson Fisk Up to No Good! AGAIN!

GAH! THE REAL WORLD CRASHES INTO THE FICTIONAL – AGAIN!

I honestly love what Dan Slott is serving up in this arc, and I love how he handles characters and makes them larger than life (in the case of Wilson Fisk, it should probably be quadruple larger than life). HOWEVER, once again someone needs to take a heavy pen and keep the “product placement” phrases out of the Marvel 616. I railed on Peter’s girlfriend bringing over Netflix for them to watch a few issues ago, and in this issue Black Cat calls Peter out on his new costume saying “It looks like an ad for the new Tron movie.”

We get it. Disney owns Marvel. Disney released Tron several weeks ago. A+B+C=Free Product Placement. All the higher ups are probably patting themselves on the back right now.

Once again, while a funny line (and appropriate), those of us in the know – and let’s face it, if you are reading comics at all and don’t know Disney bought Marvel there’s something wrong with you – find these little stunts tiresome to say the least. Is this Dan Slott’s fault? The Editors? The EIC? Mickey Mouse his bad self? Somewhere along the line little things like this are fucking up what would normally be an incredibly enjoyable reading experience. It’s like a big hammer hitting the reader on the head, pulling them out of the story, and thus interrupting the flow of a perfectly paced story.

While it may be the inclusion of a word that has got me riled up, the removal of Hobgoblin’s lines in the second half of the book are well done. This issue shows off two features of the new Spider-suit; invisibility and acoustical dampening, which effectively shorts out Hobgoblin’s laugh and gives Spider-Man the edge in the fight over the stolen Reverbium sample. The back and forth allows the reader to fill in the missing bits, and Peter’s last comment to Fisk just before he plummets in the collapsing Fisk Building will definitely bring a chuckle to the room. Everything from the start of the issue to the finish is well handled (except for that Tron bit), and I really got a kick out of reading the escapades of the heroes and villains throughout the issue. And for those who are hooked on Peter Parker’s “With great power” line, Phil Urich’s closing line puts a nice spin on the now famous line.

Do you need any more reason to fall in love with the art?

Okay… how’s about the awesome coloring by Edgar DelGado? When it comes to the digital coloring in comics, the last several years seems to have been nothing more than showing off. Now, artists are finding their rhythm and the understanding of light reflection and bounce is really starting to show on the page. We know the flaming sword will return, and if Peter keeps the new suit, I expect more pages will look like wondrous works of art.

Going forward, If every issue of Amazing Spider-Man is as good as these last three issues, Batman may quickly find itself at the very bottom of the read pile at Major Spoilers. I LOVE THIS ARC! The Slott/Ramos pairing in Amazing Spider-Man is the best writer/artist team-up I’ve seen in years. The story is great, it gives you hope that things are looking up for Peter (hint: it’s not), and the art is fantastic. Keep in mind that my Spider-Man reading history is sparse at best, so me going ga-ga for this series should tell you something. Do yourself a favor and head back to the comic book store and pick up the three issues of Big Time, they are worth it, and this issue in particular is good enough to earn 4.5 out of 5 Stars.