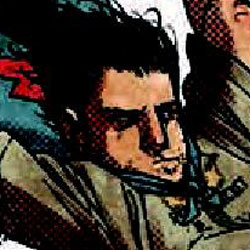 If you’ve been told all your life that you’re a loser, that self fulfilling prophecy is bound to play out. Now put that idea into the hands of Joe Hill, and you’re going to end up with something that gets really weird. Eric has had a security blanket since he was really young. As he grew, his mother turned it into a super hero cape, and it gave Eric no end of pleasure playing hero with his older brother – that is until he fell from a tree, split his head open, and nearly died. As the years went by, Eric’s life pretty much stayed in limbo as he spent more time playing video games and getting high than actually making something of his life.

Surprisingly, he did meet the woman of his dreams, they married, and were to live happily ever after, until Eric’s slacker ways ended the relationship, sending Eric to live in his mother’s basement.

In short, Eric is that loser you’re always glad you never became.

That is until the night he found the cape from his childhood, and discovered it actually gave him the power to fly.

And that is where the story makes a turn for the worse. If you’ve been told you’re a loser since a young age, at some point something is going to snap, and that’s exactly what happens to Eric as he begins his attack on those he thought loved him.

It isn’t pretty. It’s gruesome, and is an interesting twist on the superhero story. This isn’t like Irredeemable, or Squadron Supreme, where a powered hero turns his back on the world, this is a below average guy who discovers a power and decides to use it for evil. I haven’t read Joe Hill’s original story, but if Jason Ciramella has captured even a tenth of what Hill put to paper, then I can’t wait to see what happens next.

A DIFFERENT KIND OF ART

The first thing that popped out at me when I read through the issue was how Nelson Daniel used zipatone as part of the shading throughout the issue. It gives another level of interpretation to the work, as readers are presented with the story of someone finding they have powers associated with a comic book, and parts of the world we’re seeing uses a familiar comic book art style.

Zach Howard’s overall art, is great as he captures the central character at various stages of his life, and with each jump in time we know exactly who he is. Framing and staging are great, too especially during the flight sequences, where we’re only given a glimpse of his powers and abilities, and nearly no facial reactions to his new found power save for the evil look in his face before he carries out his first mission.

I can honestly say that The Cape is the creepiest story I’ve read in 2011. The final turn leaves the reader stunned, and wondering what will happen next. Zach Howard’s art and Nelson Daniel’s colors bring make it more graphically intense, and the entire issue is worth picking up. The Cape is off to a good start earning 4 out of 5 Stars.