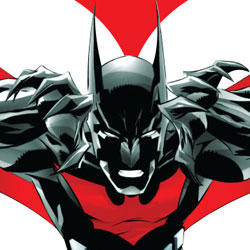 Batman Beyond has had several mini-series over the years, and it looks like DC believes enough in the character and Earth-12 to give him an ongoing. And what better way to kick the series off than to have family members entangled in a hostage situation, and forcing Terry to confront the Justice League? Previously in Batman Beyond: When Dick Grayson got a clone job from Amanda Waller, the clone went a bit wacky and became Neo-Gotham’s version of Hush. Terry McGinnis (with a little help from the new Catwoman, and the original Robin) was able to bring the clone down, and since then things have been rather quiet…

There have been a few comic stories that have examined the side-effects of having super powers – Spider-Man ended up killing Mary Jane with his radioactive Spider-swimmers, and in this issue, Adam Beechen gets a chance to play with the unintended side-effects of powers. Carson Jatts spent years working in the Justice League Watchtower in the Metahuman Evidence Confiscation Facility, and the constant exposure to the super powered beings and their super powered toys have given him a bad case of the Soon-to-be-Deads. Instead of accepting his fate, getting involved in a class action lawsuit, or checking Barbara Gordon off his bucket list, Jatts decides to seek revenge.

His plan of action? Steal a metahuman weapon and use it against his employers. It’s probably the wish of many a dissatisfied worker, and I sure hope Beechen isn’t drawing inspiration for this story from his own desires… just saying…

Using his access key, Jatts strolls into the facility and attempts to steal the wand of The Matter Master.

Matter Master (First Appearance: The Brave and the Bold #35)
Scientist turned alchemist Mark Mandrill is trying to turn lead into gold, when the compound he is working on explodes. Instinctively shouting “Stay away from me!”, he is amazed when the compound obeys his commands. Dubbing the material “Mentachem”, he makes a wand out of it and uses it to begin a life of crime. He fought against Hawkman for many years, as well as the Justice League of America. He is also a member of the Secret Society of Super Villains.

Unfortunately, the Metachem and Jatts don’t get along, as he ends up absorbing the powers of the wand, giving him the power to transmute matter with merely a thought and a touch. Maybe it is a nod to the original hero/villain team-up, or maybe it is just happy coincidence, but while fleeing, the new Matter Master battles Hawkman in the skies of Neo-Gotham. I kind of like this little twist if it was indeed planned, and if it weren’t for the Wikipedia, it would I (and probably many others) would never have known the connection. The scuffle causes Jatts to flee to the nearest mall, where he seals the place down real good. The Justice League and the police are more than willing to accept a few casualties if it means bringing the criminal down, but there’s just one little problem – Terry’s mother and brother are trapped inside with the mad man.

Terry does get plenty of face time in this issue, as he spends about as much time outside of the costume as he does in. It’s nice to see Terry making an effort to spend time with his family and girlfriend Dana, as it keeps him grounded. This exposition, while a bit forced in the chuckle department, does set up Batman’s reaction when he decides to stand up to the Justice League, preventing them from going in guns a blazing.

While it isn’t the dense, semi-confusing story readers were presented with in the last mini-series, Beechen delivers a very direct tale of family, responsibility, and a new villain to add to the growing gallery of nut-jobs. There are no real surprises, but the big dramatic moments are handled as if they were part of a big screen feature.

Because of my remote living conditions, new comic book day for me has always been on Thursdays, so in order to get a day-and-date review of this issue, I turned to the one place where all the cool kids are hanging out these days, my iPad. DC announced Batman Beyond would be the companies new day-and-date title for the mobile multi-media device, and it only took a moment to open ComiXology, click the buy button, and begin reading.

While I do enjoy the experience of reading some print comics, the electronic version does allow the reader to zoom in and see more detail than might normally be picked up when reading a physical copy. In this case, the ability to zoom in and isolate individual panels gave me the chance to really examine Ryan Benjamin’s work. The page layout gives one the impression that we are reading something bigger than it is, as the use of wide landscape panels show the urban sprawl and give a sense of magnitude to the world.

Benjamin’s character work follows the Dini/Timm style fairly well, but he adds quite a bit more detail in the faces during the close ups. This can be a bit distracting at times, especially when Bruce Wayne’s face goes from relatively smooth to a jumbled mess of lines in many of the panels. It can be off-putting at first, but it wasn’t as much of a problem by the time the final panel appeared.

Batman Beyond is one of those titles that sits in a weird area when it comes to readership. The people who are really going to get into this book are those who watched the original series, or who are O.C. over everything Batman. To everyone else, this book probably has little appeal unless they are looking for something that is removed from the current event goings on. That being said, Batman Beyond #1 is worth picking up. The story is not mired in continuity like the last mini, and is an entertaining read. The art is good, and a little less pressure on the ink pen might help going forward. Overall, Batman Beyond #1 is an enjoyable read, earning 3.5 out of 5 Stars.