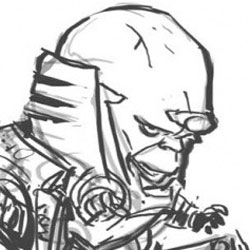 MODOK is one of those characters that has always freaked me the F**K out.  A giant head, with tiny arms, and a rocket strapped to his ass, are the makings of nightmares that plagued me for years when I was in my early teens.  Now Marvel has cranked the creep factor up to 11 with the reveal that MODOK got a set of spider legs for Christmas thanks to Gabriel Hardman with input from Jeff Parker.

Looking at Hardman’s designs, the most striking addition is easily M.O.D.O.K.’s creepy spider-like legs. “There will be a modular aspect to his armor that we haven’t seen before,” Hardman teased.

“It’s a new age, and we need a new M.O.D.O.K. who works in new ways,” added Parker. “This one will get out and interact in a way the previous model didn’t. And he’s a bit of a charmer.”