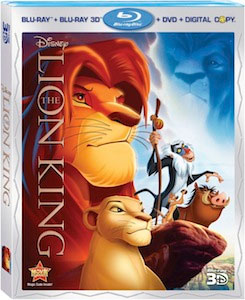 Continuing its leadership in the advancement of 3D entertainment and marking the most significant title commitment to the growing Blu-ray 3DTM market, The Walt Disney Studios today announced plans to release at least 15 of its films for in-home viewing on Blu- ray 3D in 2011.

Among the stellar list of films to debut on 3D include beloved and celebrated animated classics THE LION KING and BEAUTY AND THE BEAST, recent theatrical releases including the visually stunning high tech adventure TRON: LEGACY and acclaimed box-office smash hit TANGLED, plus many others to be announced that will release day-and-date and packaged with the Blu-ray 2DTM version.

“As our contemporary library of 3D content continues to grow, and the original artists and filmmakers meticulously „dimensionalize‟ their work for release on the Blu-ray 3D format, we will be offering movie- lovers the most incredible in-home entertainment experience they will ever have,” noted Lori MacPherson, Executive Vice President and General Manager, Walt Disney Studios Home Entertainment. “In addition to offering new releases day-and-date in 3D and further cementing our leadership in the marketplace, we‟re thrilled that consumers will have the exclusive Blu-ray 3D experience of two of the most celebrated Disney animated features, THE LION KING and BEAUTY AND THE BEAST, in their homes.”

Also included among the titles slated for release in 2011 are BOLT, MEET THE ROBINSONS, TIM BURTON’S THE NIGHTMARE BEFORE CHRISTMAS, G-FORCE and CHICKEN LITTLE. These titles will join Walt Disney Studios‟ recent 2010 Blu-ray 3D releases ALICE IN WONDERLAND, DISNEY’S A CHRISTMAS CAROL and STEP UP 3, bringing Disney‟s list of available Blu-ray 3D titles for the home to nearly 20 in all.In addition to the film being in 3D, each disc will include thematically linked 3D menus, 3D previews of coming-attractions trailers and an introduction to the eye-popping world of Disney Blu-ray 3D featuring beloved characters Timon and Pumbaa from THE LION KING.

About The Walt Disney Studios: