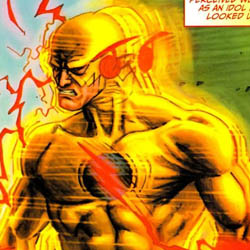 I honestly don’t recall when the current fascination with “Dark Mirror” characters came from, or when it became necessary for EVERY hero to have a negative counterpart.  Sure, Bizarro and Reverse-Flash date back to the Silver Age of Comics, but they were the exceptions, rather than the rule.  Even characters like Luthor and the Joker have been retooled to be counterparts of their heroes, as if it’s impossible to have a superhero who doesn’t have one single nemesis who should be behind every negative aspect of their lives.  Personally?  I blame Venom.  Either way, Reverse-Flash is much like Barry himself:  He’s been part of great stories and part of terrible stories, but somehow DC editorial only remembers the great ones, and thus he has returned from beyond to plague Barry again.  Given my dislike for Dark Mirrors and my indifference towards the entire first arc of this title, whaddaya think are the odds that I’m gonna love this one? Previously, on The Flash:  Barry Allen and Eobard Thawne have a long history of antagonism.  Depending on which story is being told, Thawne is either the greatest Flash fan ever, a distant relative of a family that has always been a rival of the Allens, a ‘Single White Female’ stalker or Hannibal Lecter with super-speed.  In any case, he killed the Flash’s wife in cold blood, then tried to kill his fiancee some time later, causing Barry to kill him in retaliation/self-defense.  (The fact that Barry, Iris AND Eobard have all come back from the dead is just one of the many reasons that I find our hobby to be at once wonderful and terrible.  Just as Germans love Hasselhoff, fanboys hate notions of morality or change.  It’s kind of our curse.)  Recently, Professor Zoom has made himself even more reprehensible by travelling into the Flash’s past and killing his mommy, then framing Barry’s papa for the murder, sending the original Flash back to his career in police science with a vengeance and a yen to clear up cold cases.

“Free,” muses the recently freed Professor Zoom as he hightails it away from Iron Heights prison.  “Free to change it all.”  Breaking into the timestream, he sets off for someplace mysterious, and makes me realize something I hadn’t before: Somewhere along the line, Francis Manapul disappeared, and the art on Flash was suddenly being handled by Scott Kolins.  I don’t know if it’s the subject matter or the change in art that works for me, but I simply LOVE the first few pages of this issue, as Professor Thawne thinks about his past, growing up in the heavily-structured 25th Century.  It’s a strangely disconnected life, and his interactions with his family are awkward at best, but the real surprise hits when Eobard Thawne is nearly stopped dead by his own little brother, now a member of the police force.  The younger Thawne offers his big bro a chance to turn himself in and get a lesser sentence, but startlingly is throttled to death by the current timeline’s Reverse-Flash.  “My name is Eobard Thawne.  I was an only child.”

The rest of the issue is a pretty entertaining (and a little bit fascinating) enterprise in temporal mechanics, as Reverse-Flash reshapes his own past, creating the life that we have known him to have, leading up to the discovery of the time capsule that contains relics of The Flash himself, leading to his Silver Age origin story.  The issue actually makes you feel for the psycho-killer of Flash wives, which is a pretty difficult proposition in itself.  Johns works his magic with repeating dialogue, as though Thawne is telling us the story of how things are going to have always been, and will do anything to make things “right.”  We end the issue with a happy y0ung Eobard Thawne taking on the role of Flash for the brave new future world, and his older self watching bitterly, knowing how it’s all going to end up.  We end with a short sequence explaining why Reverse-Flash doesn’t just erase Barry from the continuity rather than toy with him, and I have to admit, it very ably answers questions that I didn’t realize I probably should have had all along.

The Verdict:  Better Than The First Six, And That’s Good Enough…

This issue is heavy on character, deeply ingrained in Flash culture, dynamic, meaningful and well-drawn.  In short, it’s everything that this series HASN’T been from day one.  I am astonished that we spent half-a-year on a moribund murder mystery that didn’t even really have any mystery to it, and that the creators tried to get six issues out of the concept of “Hey, wouldn’t it be neat if the Reverse-Rogues existed, too?”  This issue is really the first one that HAD to be a story about Barry and Eobard rather than Wally and Hunter or Jay and Clariss.  It’s a finely crafted issue, and it convinces me to stay with this book and see what the whole Flashpoint thing is going to be all about.  (I can’t hear “Hot Pursuit” without hearing Roscoe P. Coltrane snickering afterwards, though.)  The Flash #8 is where the book really, finally hits it’s stride, and the only thing that keeps it from being a perfectly scored issue is the fact that the main character doesn’t appear anywhere but in flashback, but it’s still good for an impressive 4.5 out of 5 stars overall.

Faithful Spoilerite Question Of The Day:  Is it just Batman-envy that causes writers to kill off and endanger parents?  And why does it always seem like the mother figure gets the worst of it?