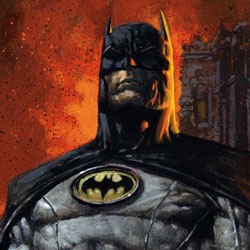 Well, it ain’t Legends of the Dark Knight, but The Dark Knight may just do in a world where the Batman family has gone international, and plots and story lines have created a mishmash hodgepodge of continuity that would drive the normal fan screaming into the night. Lately, I don’t really know what to make of Batman. If he isn’t jet setting in Japan, he’s simultaneously in Argentina and Paris with Dick Grayson. And let’s not get the rest of the Bat-family too far in the spotlight as Selina Kyle is in both Japan and Gotham, Red Robin is running a multinational company while hanging out in Russia (or is it Korea?), and is Barbara worrying about being Oracle, or killing the database to the stars?

What really puts The Dark Knight into a warm and fuzzy place for me is that the story takes it back to the street, a kidnapping case that has some very spooky undertones, that makes me forget about all the other bullshit going on in the Bat-titles at the moment. The opening issue doesn’t give too much away. We learn that Dawn Golden has been kidnapped and no one has any leads, least of all Batman, and to make matters worse, he’s known Dawn since the two were young children.

And what’s with Dawn Golden/Golden Dawn word play? Is David Finch trying to make a reference into the magical order active in the 19th and 20th centuries? Finch promised this book would go into a dark direction dealing with mysticism and demonology, so the name play does give readers a little nod that the troubled woman may be more than just a troubled woman. Especially when the Penguin shows up with Batman in the crosshairs.

While there are references to Batman, Inc. Finch wisely downplayed the tie-in to the larger DCU events, and except for the new suit, this feels like the tales of Batman many of us old folk grew up reading. The pacing and tone are just perfect for a dark vigilante of the night who makes his home in the city that is also dark and gloomy. Sure there is the whole “oh, a childhood friend he’s known for years, but is only showing up now” vibe might seem a little Hush-handed, but it doesn’t seem too far out of place as the Bruce Wayne history has usually been played on the down low so plot devices like these can be brought into play.

FINCH ON WRITING/FINCH ON ART

I don’t know how quickly Finch cranks out his art, but I’m worried that doing both the writing and art duties on this book will lead to quite a few delays – the second issue comes out six weeks after the first before moving to a regular four week release (at least according to the DC website). And the only reason I’m concerned is because I love how Finch handles the dark gloomy streets of Gotham and takes the time to make light and shadow work in the storytelling.

The layout works to keep the pace of the tale moving along, and I like how Finch breaks out from the gutter, and allows frames to overlap in the fight scene with Killer Croc to give the illusion that everything moves quickly. If I only had one complaint in the art of the issue, it would be in the color where some of the highlights and pings on objects and people seem to bee a bit too much for the light sources in the scene.

I’m not a big fan of Global Batman, nor do I care for Outer Space Batman, rather I enjoy the tales that involve a lot of mystery and detective work, and this issue does deliver that up… in a way. Batman and mystical elements don’t always work for me, which is why I’m surprised I enjoyed this issue so much. If I had to cut 18 books from my pull list and only keep one Batman title, The Dark Knight would be the front runner right now. The Dark Knight #1 is worth picking up and earns 4.5 out of 5 Stars.