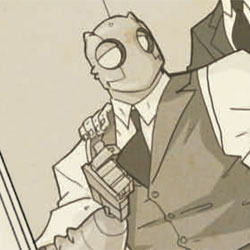 You’re a robot that doesn’t sleep, doesn’t eat, and yet your creator wants you to spend all your free time contemplating the universe. What’s an atomic powered robot to do? If you are Atomic Robo, you find a way to get yourself into trouble (and quite possibly the greatest adventure of all time). Previously in Atomic Robo: Deadly art of Science: Bored with studying all day, Atomic Robo’s desire to pursue adventure lands him in the lair of Jack Tarot, the crime buster of Chicago. From Robo’s point of view, the pairing of the two could be bigger and better than anything he’s read in the funny books. He only has to convince Tarot of the fact. Meanwhile, a Mayan crystal skull has been stolen and delivered to the hands of someone unknown…

Once again Brian Clevinger delivers an issue that is filled with humor that ranges from the play on words all the way up to the absurd. Robo does convince Jack Tarot to allow him to join the team, or rather Jack’s daughter takes it upon herself to accept Robo as a full fledged member regardless of what papa Jack thinks. It’s clear that she’s got the hots for the atomic man, and readers will quickly see who wears the pants in the family.

The mystery of who stole the crystal skull still goes unresolved, but subtle hints still seem to point to Tesla’s arch-nemesis Thomas Edison. It’s this portion of the story that pulls the issue together and keeps it from being a series of comedic skits.

What works best in this issue is how Clevinger ties past story arcs into this series. At one point Robo explains how he’s defeated a monster from beyond space, and then Tesla and Robo open a portal to the vampire dimension causing Tesla and Robo to have an exchange on pacifism and the violent method Tesla wants to use to dissect the one vampire that got through.

Scott Wegener. Is there anything else to say? His style remains consistent and fun, and is uniquely his own. While others might fall back on overly dramatic reactive slaps to the face, or rolling of the eyes, Wegener tones it down and allows the deadpan reactions tell the story. I can’t stress enough how much I like his art. He’s the only guy I know who can show emotion in a robot with no mouth or pupils. If he was looking for a way to stretch his legs, I’d really like to see him bring a little more detail to his environments and backgrounds, but his current style works well against solid colored backgrounds.

Once again, Atomic Robo doesn’t disappoint. A story that develops naturally, and gives a nod to the pulp adventures of the time period. Clevinger understands that humor doesn’t have to be crammed down the throat, but rather something that evolves naturally in the story. Likewise, Wegner’s art enhances the narrative in his recognizable style, and he’s able to make every character unique. Atomic Robo: Deadly Art of Science #2 is another fine example of comics done right and earns 5 out of 5 Stars.