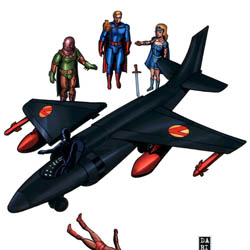 The reveal of the truth between Hughie and Annie January (or, at the very least, Annie’s half of it) has sidelined a lot of the underlying drama of this book, but the superhumans known as the Seven are still complete bastids, and Billy Butcher and his team are still out to bring them down if they get out of line.  And those with long memories will recall that Annie took her place in the big time from another hero, a tragic schmuck called the Lamplighter.  His story is about to be told… Previously, on The Boys:  Butcher.  Wee Hughie.  Mother’s Milk.  The Frenchman.  The Female.  Together, they comprise the covert CIA team known as The Boys, whose mission is to keep tabs on (and, if necessary, step in to control) the activities of the world’s superhero types.  Through a series of odd coincidences, Hughie has ended up in a relationship with Starlight, a member of the most popular and lucrative super-team, The Seven.  That breakup has gone very badly, leading Hughie to take a sabbatical from the team, leaving Butcher and his increasingly dysfunctional membership alone.  Frenchie and the Female are unhappy with their treatment, while Mother’s Milk still holds Butcher responsible for the horribly way that Wee Hughie found out about his girlfriend’s “job interview.”  Making things even worse, CIA Director Rayner, over whom Butcher held a great deal of sway through charisma and the occasional special sexual favor, has left her underling (the man Butcher calls Monkey) in direct control of the operations of The Boys, and he intends to make Butcher pay for years of abuses.  I suspect that there’s a comeuppance in Monkey’s future…

We open with a scene that is half-chilling, half-almost-goofy, as The Homelander (leader of the Seven, strange visitor from another planet) has a Gollum conversation with himself.  “People are toys.  They’re toys and they’re there for my amusement,” he tells himself, and then responds.  The scene gets weirder and weirder as he responds to his own statements, holding what sounds like a perfect rational conversation with himself, like a red-white-and-blue Travis Bickle.  The scene keeps itself from devolving into something silly, though, as we cut to Frenchie and the Female watching the live feed from Seven headquarters, and the sheer terror in their faces sells it all:  The most powerful person in the world has lost his mind, and pretty much EVERYONE is in danger because of it.  At the same time, Butcher and Mother’s Milk try to find leverage against their new overseer (luckily for Butcher, his particular perversity is about to become public) and Butcher flashes back to previous missions of the Boys.  It’s only three panels, pitch black, but the dialogue is particularly horrific and fills the mind with all sorts of awful imagery.

Butcher blows off the concerns of his junior members, even dressing Frenchie down in a VERY condescending fashion, and sets off on a mission of his own.  As he travels, he remembers the last days of Mallory’s leadership of the Boys, the events leading up to “The Thing That Happened With The Lamplighter,” moments that fill in a number of blanks about the time leading up to issue #1 of the series.  Russ Braun once again does wonders with the art in the issue, evoking the tone and composition of Darick Robertson without veering off into knockoff territory, as Butcher reminds himself of the mistakes he made previously:  Underestimating the corporate instinct for profit uber alles, and forgetting that there’s always an element of surprise in play.  That surprise comes in the final scenes of the flashback, as Lamplighter stuns his comrades and sets out to gain revenge on Mallory, Butcher and the other members of the Boys.  We end the issue with Lampie on the observation deck of the World Trade Center, looking down at his enemies as they walk away, unsuspecting of his intentions.

The most difficult part of The Boys to digest is the fact that Butcher, the leader of our protagonist’s own faction, is just about as dangerous, screwed-up and mentally twisted as Homelander himself, though for different reasons.  His treatment of Frenchie this issue is simply deplorable, and the loss of Wee Hughie is due to his own manipulativeness and paranoia.  There are implications in the flashbacks, though, that this is due to whatever is about to will have happened several years ago in the big anniversary book next month. (I’m a Legion of Super-Heroes fan, I’m good with theoretical time-track conjugations.)  Looking back at the first issues of the book, I’m pleasantly stunned to think that it’s even still being published, especially given the high-profile cancellation by DC before it even hit double-digits.  The Boys is a book that Stephen likes to joke is all about sex, violence, degradation and superheroes getting taken down a peg…  and all that has grains of truth.  But the real story here is about what happens to people when there are no consequences, and how they change when the end justifies the means.  The Boys Forty-Nine is a fascinating study in how to make unsympathetic characters approachable, and earns a very impressive 5 out of 5 stars overall.  Ennis and company are telling a story that no one else could (or even would) and it’s one that’s well worth reading, as long as you’re over 18…

Faithful Spoilerite Question Of The Day:  Would a The Boys/The Authority crossover be epic, or would it be EPIC?