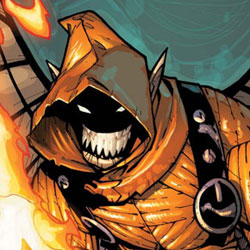 What does Big Time mean to you? For Peter Parker it means good times, for a new/old villain, it means something very different. Previously in The Amazing Spider-Man: Things were looking pretty bad for Peter Parker when he found out he lost his lease on his apartment and needed to find a place to live, even though he didn’t have a job or money. By the end of the last installment, things looked like they were turning around as Peter landed a great job and a great place to live. Face it Parker – You hit the Big Time…

THE PROBLEM WITH BEING CURRENT

After last issue, I was pretty sure I was going to end up with a disappointing experience simply because good times (not THAT Good Times) never lasts long for me. However, this time I was pleasantly surprised to discover the issue was just as solid as the one before. The best part about the issue wasn’t Hobgoblin crashing Peter’s first day of work, nor was it the playful banter between Spider-Man, Black Cat and Norah, and it certainly wasn’t the great, but brief interplay between Peter and his CSI girlfriend as she almost discovers his Spider-Stuff. Heck, it wasn’t even the hilarious moment when Commander Rogers asked Mayor J. Jonah Jameson to give Spider-Man the key to the city. The finest storytelling moment of this issue played out like the opening sequence to Psycho as readers are introduced to Roderick Kingsley who starts the issue as the current Hobgoblin, but before the reader hits the opening credits, he’s dead and a new Hobgoblin is taking his place.

It’s one of those moments you really don’t expect to happen, and then it makes you even more interested in seeing how the rest of the issue is going to play out. It worked for Hitchcock, and it works great for Slott in this chapter.

With all the really fun moments that pop up in the issue, there is one thing that kind of bothers me. At one point, Peter’s girlfriend stops by the hotel and says, “I brought Netflix.” In an attempt to be relevant and current, Slott uses a callout that totally pulls me, and probably other readers, completely out of the story. Don’t believe me? Yesterday, November 30, 2010, my friend Rodrigo Lopez came over and said, “Hello my good friend, Stephen Schleicher! I brought over some Netflix. Let’s pop a few Miller Genuine Drafts, sit down on your Furniture Mart sofa, turn on your 65-inch Sony Bravia television, warm up the Sony Blu-Ray player, and watch us some fine movies by alumni from Northwestern University.” This isn’t the first time writers have pulled this kind of stunt to remain relevant and current. Remember Captain America’s dressing down for not know what MySpace was? At the rate MySpace is falling, Steve Rogers probably isn’t the only person walking around right now who doesn’t know what MySpace is. I’m really liking how these first two installments of Big Time are playing out, and it could end up being one of those arcs that years from now comic fans are still talking about, but that one simple name drop could end up having people exclaiming, “I loved ASM Big Time! It was so awesome! Too bad it’s sooooo dated…” (Hint: If you say it in the whiny voice that Matthew is found of doing, it sounds so much better.)

I know. This is a minor moment that I’m making a big deal out of, but when I hit that line, I was completely jarred out of the joy of reading the issue, back to the real world, where my first thought was, “Damn. I better send those Netflix movies back so my good friend Rodrigo Lopez, can get the next fine Disney feature film that is in his Netflix queue.”

There are a few other dialogue moments that come off kind of stiff, but they still work in this issue, as apparently everyone is scared of using Editor Notes these days.

On a side note, I’m thinking about trying to talk my wife into naming our next kid Uatu Jackson. I let you know how it goes…

COME FOR THE BIG TIME, STAY FOR THE RAMOS

Once again, Humberto Ramos delivers art that I love. While I lamented last time about the lack of big feet, big heads, there were character moments that the Ramos style from days gone bye shown through and made me smile. Plus, there were plenty of Black Cat T&A moments that should keep those that are into that sort of thing happy.

Regardless of the problem I have with corporate name dropping, this is a really good issue. There are great action moments, great dialogue moments, and moments where the art shines. There’s not a lot of super heavy continuity concerns that would keep the casual/new reader away, and any questions that would arise can easily be found by doing two minutes of online research. The Amazing Spider-Man #649 is worth buying and earns 4.5 Stars.