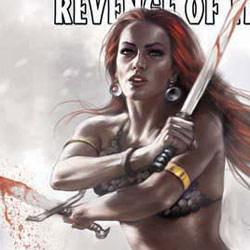 The gods are about to get their revenge on Red Sonja

The sequel to Red Sonja: Wrath of the Gods arrives in February with Red Sonja: Revenge of the Gods.  In this premiere issue, defeat is eating away at the trickster god Loki.  He hates being banished to the barbaric, backward lands of Hyboria.  He hates the food, the wine, the women and he hates Red Sonja most of all for putting him in the position.  He dreams of revenge and putting this backwater land under his heel.  Sometimes dreams come true.  Written by Luke Lieberman, look for Red Sonja: Revenge of the Gods #1 this coming February!

“Loki’s bitter defeat at Sonja’s hands still tastes fresh, imagine a god reduced to consorting with common mortals,” says writer Luke Lieberman.  “But Loki is a thinker, he has a plan to regain his former glory and more, all he needs is to unleash the Ragnorok.  Sonja thought she was done with the trickster, little did she know his greatest trick is yet to come.  And when doomsday is upon them, she must call on Thor once more – only one things is certain, many will die in the days to come.” Red Sonja, the She-Devil with a Sword, is a high fantasy sword and sorcery heroine created by Roy Thomas and Barry Windsor-Smith. She first appeared in Conan the Barbarian #23 by Marvel Comics.  Red Sonja has become the archetypical example of the fantasy figure of a fierce and stunningly beautiful female barbarian who typically wears armor resembling a bikini or lingerie.  The character now appears monthly in two of her own series, Red Sonja and Queen Sonja, as well as a series of mini-series and one-shots from Dynamite Entertainment.  So don’t miss Red Sonja: Revenge of the Gods this coming February!