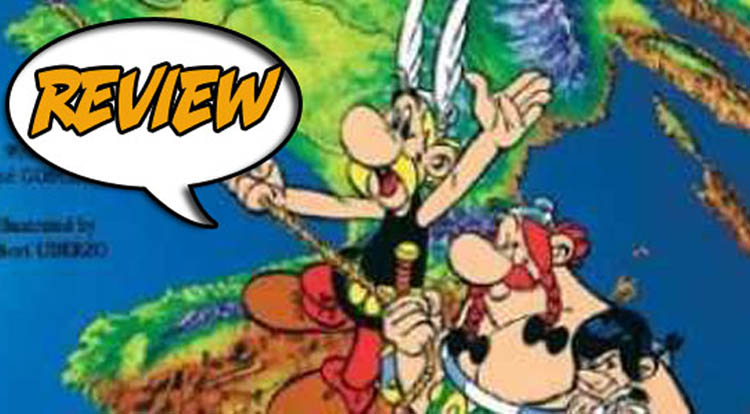 The turkey is gone, and before the tryptophan coma kicks in it’s time to get to one of our other traditions at Major Spoilers – our Retro Review of another Asterix book. This time around, Asterix and Obelix make their way to Spain. Previously in Asterix: The Romans are expanding their empire, and the only area they haven’t quite conquered is the area occupied by the Gauls – more specifically a small village run by a bunch of Gauls hopped up on a magic potion that gives them superhuman strength. Naturally, humor ensues.

Turns out the Gauls aren’t the only group that are giving the Romans a hard time, a group of Iberian resistance fighters, lead by their chief Huevos Y Bacon, refuse to surrender. In response, the Romans decide to kidnap the chief’s son Pepe. Naturally, humor ensues…

As a father of a three-year-old, I’ve seen my fair share of tantrums, pouting sessions, and have been around his “friends” that are experienced in the ways of screaming until they get their way. It isn’t a pleasant experience to say the least and in a small way I feel sorry for the Romans who have to put up with Pepe’s constant demands, biting, and holding his breath until he turns red. The Romans decide it best to send Pepe to an outpost near Asterix’s village, and naturally, humor ensues.

Pepe manages to sneak away from the Romans, eventually finding his way into the village. Obelix is assigned to take care of Pepe, but he’s such a burden that the village assigns Asterix and Obelix (and Dogmatix) to escort Pepe back to Spain. Little do they know the Roman leader, Spurius Brontosaurus is secretly following them in hopes of getting the brat back into Roman hands. In order to get closer to the group, Brontosaurus disguises himself in the garb of the locals. And yes… humor ensues.

All goes well, as well as can be expected when the group consists of a leader on a mission, a lummox who only wants to eat boar, a brat who can’t be satisfied, a ne’er-do-well, and a cute little dog. Eventually Brontosaurus discovers Asterix has the magic potion that will give him strength and sets off to steal it in the middle of the night. A chase ensues and Asterix and Brontosaurus run smack into the middle of a patrolling Roman legion. It’s off to the circus for both!

There Asterix invents traditional bullfighting when a woman drops her red clock, and he uses it to distract and bring down a bull. In his victory, he’s also secured his freedom and that of Brontosaurus as well, but instead of returning to the life of a Roman soldier, Brontosaurus decides to become a bullfighter.

While all of this is going on, Obelix manages to get Pepe back to his village, Asterix eventually catches up, the two defeat the Roman army laying siege to the village, and everyone is happy in the end. Well, except for the Romans who have suffered defeat yet again.

Though I enjoyed this outing, the book walks a thin line between humor and racism as the Spaniards are depicted by using a lot of stereotypes. It’s not super offensive, but I can see where some people might get bent out of shape over the depiction. Goscinny once again delivers pun after pun, that are the staple of the Asterix stories, and this book introduces the reader to Unhygienix, the fishmonger, and his wife, Bacteria. I appreciate the puns throughout the book, but it does tend to smell like yesterday’s fish after a while.

I also enjoyed the other historical and literary references, including an appearance by Don Quixote. While a lot of the historical references aren’t necessarily chronological, they do work in this story and everything comes together nicely.

THE ART OF HUMOR

Asterix in Spain was the 14th book released in the series, and though Uderzo has worked on all the books, I think this period is a fine example of his character work with Asterix. I like the exaggerated expressions, the great landscapes, his ability to capture a variety of locals in this book.

While the page layout generally follows the nine panel layout throughout, I like how the panels alternate between square and landscape on each row, with at least one row having three or four panels in them. There’s almost a rhythm in the way the story flows visually, and if I had more time, I would see if they pattern had a hidden meaning.

Asterix in Spain is a fine example of the series. Lots of puny humor throughout, fantastic art, and secondary characters that I can almost get behind. This is a book that is worth checking out if you get the chance, but not one that I can recommend buying if you haven’t read anything from Goscinny and Uderzo. Overall, it’s a fun experience, but only worth 3.5 out of 5 Stars.