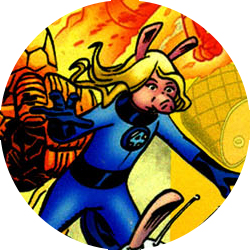 Over the years comics have given us a staggering number of alternate realities, many of them just thinly veiled excuses to put our favorite superheroes into improbable situations with minimum clean-up. But sometimes alternate realities and alternate futures yield something more, sometimes they accomplish exactly what they should; to allow us to examine a character under a different light. What follows is a list of the best, most successful or so-ridiculous-they-come-back-out-the-other-side-and-are-cool-again characters from alternate dimensions or futures. To make it on this list a character had to be A) interesting B) be from the same company or creator that owns its originator character and C) not be from the Marvel Apes universe.

Ok, this might seem like a cop-out, but honestly I can appreciate what Ultimate Spider-Man once was. Marvel wanted to A) Hook younger readers not familiar with Spider-Man’s continuity, B) create a cohesive narrative interconnecting important events in Spider-Man’s career and C) Make money. By those standards Ultimate Spider-Man was very successful. So why is he down at #10? He’s still too similar to 616 Peter Parker.

Honestly I probably like this guy because he reminds me of Frog from Chrono Trigger. This may seem like a dumb choice at first glance, but if you consider that the other Thor alternative is some sort of alien, anthropomorphic, emaciated horse; is a four inch amphibian superhero that big of a stretch?

I have to admit that one of the parts of the Scott Pilgrim saga that didn’t work for me was the presence of Nega Scott, or rather, the resolution of his thread. That said, I felt that the movie did a spectacular job of setting him up and using him to maximum efficiency. My evil duplicate is not nearly as cool, largely he just yells in a loud, squeaky, Italian accent.

Marvel’s 2099 line was not the best idea they ever had, which for a long time made me wonder why they keep trying similar things over and over. It wasn’t until I saw good old Mike O’Hara in Exiles that it really hit me. Sometimes publishers launch a whole line of comics just to see what sticks, in this case literally. You can gauge Spider-Man 2099’s success just by the number of comics he has appeared in, I mean, he surpasses La Lunatica by almost 400%

I was a huge fan of the Batman Beyond cartoon, and have, in the past blasted Marvel for trying to copy its success with Spider-Man Unlimited. That said I think Batman Beyond owes a lot to Spider-Man 2099. It’s not easy to put my finger on it, but the way that Terry operates in a stark, poorly lit, megacorp-run future is at the very least reminiscent. That said Batman Beyond accomplished something that a lot of other works dealing with the future didn’t. It was “the future of now” whereas even by 1992 the Marvel 2099 future seemed a little too 80s.

One of the perks of creating an alternate time line is that you can experiment with the very essence of a character. I always liked the route they took with Beast in the Age of Apocalypse story line, there was never too much said as to why he was a murderous psychopath, he just was. Whereas Cyclops and Wolverine had every (double reverse) choice they made explained, the Beast was just an evil genius. Of course, as cool as he and his metal pants were, all that was thrown in the toilet when they decided to scrape him onto the 616 universe. But I guess that’s the mark of a successful alternate character, to awkwardly stand guard in the mainstream universe in case any new readers want to get into the book.

Red Son was a superb series, although it suffered a little of “If things were different, they would be terrible” syndrome, an affliction that affects much of speculative fiction. Regardless, just the design of the Communist Superman was enough to sell me on the book, that Hammer and Sickle inside the pentagonal shield are almost as timeless as the two symbols they’re based on.

3) Bat-Mite (Batman: The Brave and The Bold)

Growing up I always hated Bat-Mite. To me he was a prime example of how writers could completely lose sight of a character’s central themes, having Batman deal with a popple was so aggravating to me that I couldn’t bring myself to read anything he was in. Of course that all changed after Bat-Mite appeared in the Brave and the Bold animated series. I don’t know if the B:B&B universe’s more child-like aesthetic made it easier, or maybe the slight tweak to Bat-Mite’s characterization made him easier to stomach. Either way Bat-Mite now rivals Aqua-Man as my favorite character in that show. That said, don’t let me catch any of you using Bat-Mite in fiction not aimed at kids, I mean it, this thing’s loaded.

Talk about stealing the show, Peter Griffin’s personal nemesis’ performance as Owl Man in Crisis on Two Earths is incredible. He’s so compelling it is difficult to remember the non-Owl Man scenes. As an absolute existential nihilist Owl Man is almost unstoppable. His motivation is to end his (and your) meaningless existence leading him on a one-way ticket to oblivion. Add to that some excellent character design and you have probably the greatest take on Batman that’s ever been made.

Really? Bizarro is #1? Yes, yes he is. Why? Because Bizarro was the preemptive strike against alternate characters. Nothing is more ridiculous than Bizarro, a character who is “the opposite” of its counterpart to such a ludicrous degree that he can barely maintain internal consistency. Not to mention that if you read a comic (or watch a show) with Bizarro in it you’ll be stuck on Bizarro speech for the rest of the day, which is also a mark of success.

So there you go, two Supermen, two Spider-Men, Three Bat Men and a bunch of other guys later we’ve counted down the best that alternate realities and futures have to offer. Now I’m going to go through my movie collection, for some reason I really feel like watching Any Given Sunday and Disney’s Hercules.