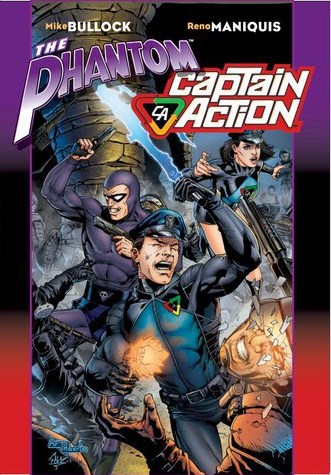 Moonstone Books has announced it is collecting the two issue mini-series featuring The Phantom and Captain Action into a hardcover collection that arrives in stores this week (November 24, 2010).

Lee Falk’s adventure comic creation, The Phantom has fought his way through the jungles of the world and the imaginations of fans for almost seventy five years. The toy that was several heroes rolled into one man, Captain Action has returned with guns and action blazing from the nostalgic past. Now, thanks to writer Mike Bullock and artist Reno Maniquis, these legendary leading men of justice share an adventure tailor-made for the two of them together!

Bullock and Maniquis weave a tale of intrigue, espionage, adventure, and action that carries both heroes to the height of conflict and the depths of danger! Also included in this collection is a never before seen Phantom prose story as well as a Captain Action short story to boot! More action than you can you shake a skull ring at!