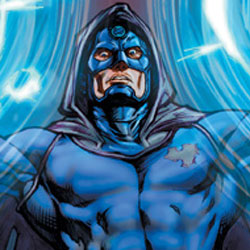 There’s nothing like having your day interrupted by some weirdo, who wants nothing more than to cause mayhem and destruction. Things aren’t necessarily going to get any better when a masked hero appears on the scene, and if you aren’t careful, you might just find yourself with a fist through your chest. COME WITH ME, IF YOU WANT TO LIVE

In this first issue, Mark Waid introduces the reader to a mysterious cloaked figure who is popping up around The City, saving complete strangers, and then disappearing before the police can detain him. For now, he goes by the name of Kronus, as his name badge is coincidentally damaged just enough to leave only those letters. While he can control the flow of time, he can’t move through time, and for now he’s here trying to stop the Split-Second Men who appear to only want to cause a lot of mayhem and destruction.

There is a lot of talking going on in this book. Most of it is from the Traveler himself, who wants to spend pages upon pages explaining who the foes are, their powers, and how he can control the flow of time. We learn little, if anything, about Kronus or the people he is saving in his ongoing monologues. By the end of the issue, the central character comes off as flat simply because he isn’t connecting with those he is saving. There’s no moment of recognition, no explanation as to why the Split-Second Men are jumping back to this moment in time – nothing except power levels and bits of science fact. And even though it can be frustrating, I can appreciate the issue for what it is – fun adventure on par with many of the B-movies from my youth.

This first issue moves very quickly, and that helps heighten the frantic nature of saving the innocent person before trying to dispatch the enemy. I’ve been a long time fan of Mark Waid, and under the guidance of Stan Lee, this issue has everything one might expect in a superhero book – a cloaked hero, fantastic powers far beyond those of normal man, and a mystery of what is really going on. There are quite a few cliches that pop up throughout the issue, but they are the things we have come to expect in the genre, making this an issue that is full of fun, and often cheesy, action.

Chard Hardin offers up some dynamic art in the issue. There is a lot of action between The Traveler and the Split-Second Men, and Hardin employs a lot of tricks to show the reader how quickly those characters are moving in the panel. I also appreciate that he uses dynamic angles to make the action seem more intense than it really is. I hate a static camera, and apparently Hardin does too, as even a simple quiet moment where The Traveler attempts to reflect upon his situation is filled with a variety of interesting shots. However, there are times when the characters look posed for dramatic effect, essentially puffing out their chests, in an attempt to say, “Look at me! I’m a hero!” And while every superhero comic book has this to an extent, it does tend to wear on the reader after a while.

Topping the issue off is the fantastic coloring and shading. Electrical effects, volumetric light, and reflections cause images to pop off the page. I like this extra attention to detail, as dark areas look sinister and daylight scenes look naturally rendered.

This issue felt really short. Maybe it is because there isn’t a lot of time for character development, or maybe it is because Mark Waid can write a tale that speeds along. In either case, there just doesn’t seem to be a lot of time to really think about the events going on – and that is okay, as this book isn’t supposed to be deep. It’s the comic book equivalent of a popcorn movie and is worth checking out. There will needs to be a bit more substance going forward, but for now, The Traveler #1 is worth 3.5 out of 5 Stars.