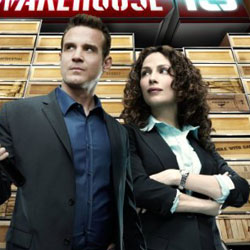 Dynamite Entertainment has signed a comprehensive license agreement with NBC Universal Television, DVD, Music and Consumer Products Group for comic books based on Syfy’s hit dramedy series, Warehouse 13. Warehouse 13 premiered on July 7, 2009 on Syfy as the most successful series in Syfy’s history and will return for a 3rd season in the Summer of 2011.

“We’re very excited to be working with our friends at Dynamite Entertainment, again,” said Chris Lucero, Director of Global Licensing, NBC Universal Television Consumer Products Group.  “With Dynamite’s stable of thrilling storytellers and talented artists, we’re confident that Warehouse 13 will stand side-by-side with some of the best comics in the industry today.”

“It is a fantastic opportunity for Dynamite to bring a popular TV Show such as Warehouse 13 to the comics market,” said Dynamite President Nick Barrucci.  “Dynamite’s Warehouse 13 comic books will be an excellent companion to the TV Show, and I am excited for fans to see what we have up our sleeves!”
Warehouse 13 follows two Secret Service agents who find themselves abruptly transferred to a massive, top-secret storage facility in windswept South Dakota which houses every strange artifact, mysterious relic, fantastical object and preternatural souvenir ever collected by the U.S. government. The Warehouse’s caretaker Artie Nielsen (Saul Rubinek) charges Agents Pete Lattimer (Eddie McClintock) and Myka Bering (Joanne Kelly) with chasing down reports of supernatural and paranormal activity in search of new objects to cache at the Warehouse, as well as helping him to control the Warehouse itself. Allison Scagliotti plays Claudia, Artie’s apprentice.

Warehouse 13 is produced for Syfy by Universal Cable Productions. Jack Kenny (The Book of Daniel) is Executive Producer and Showrunner.