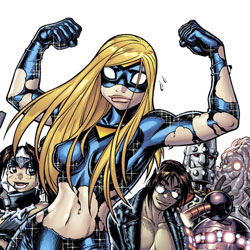 This week on the show: Girls what are nekkid, Robin’s that are Red, Hulks that are girls, and a heaping helping of everyone’s favorite comic “historian”…

REVIEWS
Stephen
RED ROBIN #17
Written by FABIAN NICIEZA; Art and cover by MARCUS TO & RAY MCCARTHY
How does the return of Bruce Wayne and the beginning of Batman, Inc. work into Red Robin’s plan to initiate an international stranglehold on crime? If Batman approves of everything Red Robin has set in motion, what will he do when his protégé decides to release the gang-leader-and-maybe-undercover-cop Lynx from prison? And guess which surprise guest star you’ll see when Red Robin takes a quick trip to Hong Kong!

Rodrigo
She-Hulks #1 COVER BY: Ed McGuinness WRITER: Harrison Wilcox  PENCILS: Ryan Stegman SPINNING OUT OF WORLD WAR HULKS! THE SENSATIONAL SHE-HULK RETURNS! Jen Walters teams up with LYRA, the all-new SAVAGE SHE-HULK, to bring the hurt down on the fugitive members of THE INTELLIGENCIA. Klaw, Mad Thinker, Red Ghost, Trapster, and Wizard tried to take over the world and now must pay for what they’ve done. Guest starring THE INCREDIBLE HULK in this all-new story of She-Hulk smackdown! Rated T �$3.99

Who was Book before meeting Mal and the rest of the Serenity crew, how did he become one of their most trusted allies, and how did he find God in a bowl of soup? Answers to these and more questions about Book’s past are uncovered in this original graphic novel by rising stars Zack Whedon and Chris Samnee. A pivotal chapter in the ongoing Serenity saga, Shepherd’s Tale is also a rollicking, action-packed epic in its own right!

MAJOR SPOILERS POLL OF THE WEEK
We’re right in the middle of a seasonal change, and as the final leaves slip off the bough and nature prepares to slumber, it brings up the question – what is your favorite season, and more importantly, why?
VOTE

MAJOR SPOILERS DISCUSSION: Empowered
Empowered is an original English-language manga written and illustrated by Adam Warren. Described by Warren as a “sexy superhero comedy”, Empowered began to take shape in 2004 with a series of commissioned sketches of a damsel in distress; these illustrations became the basis for short comic stories that helped develop the characters for the Empowered series.