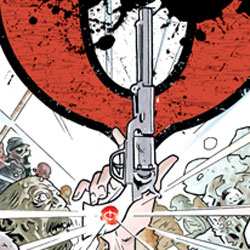 Oni Press sent Major Spoilers a sneak peek of The Sixth Gun #6, that wraps up the first arc of the ongoing series.

Sixth Gun #6
Writer: Cullen Bunn
Artist: Brian Hurtt
Format: Standard, Full Color
Page Count: 36 with 34 PAGES OF STORY!
Price: $3.99
Genre: Western / Fantasy
Age Rating: T – Teen
General Hume is at the gates of the Maw and he’s brought
Hell with him! It’s the final showdown between the forces of good and
evil, and no one is safe. If Drake survives the undead battalion… if he
defeats Hume’s malevolent henchmen… he’s still gazing down the barrel of
a shoot-out with the Confederate general not even death could stop!