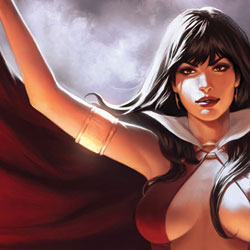 The amazing new Vampirella series from Dynamite Entertainment continues in January with Vampirella #3! Vampirella is on the prowl, and her hunt brings her face to face with her nemesis, Vlad Dracula! But before their bloody showdown, Vampirella must unravel the mystery of the Crown of Worms… and solving that puzzle may spell her destruction! Vampirella #3 is written by Eric Trautmann (Action Comics co-written with Greg Rucka), illustrated by Wagner Reis, with covers graced by some of comics current and up and coming premiere artists – Jelena Kevic Djurdjevic, Rodolfo Migliari, Sean Chen, and Ale Garza!

“This is where the plot really starts to move into high gear, with mysteries layered upon mysteries,” says writer Eric Trautmann. “What is the Crown of Worms? What is Vampirella’s relationship to it? And why is Dracula being so helpful all of a sudden? Plus, a high-kicking, hyperviolent vampire fight that literally brings down the house, a new supporting cast member, a room full of guns, and a supernatural vision of the apocalypse. Poor Vampirella is having a very busy day.” 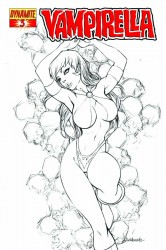 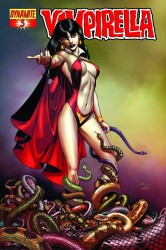 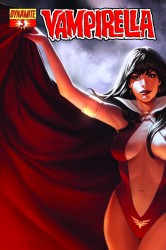 Vampirella debuted in 1969 in a black & white magazine titled simply VAMPIRELLA. With a stunning cover by legendary artist, Frank Frazetta, Vampirella #1 quickly made publishing history with its depiction of a vampire heroine, and its success prompted comics giants DC and Marvel to launch horror titles of their own. Vampirella appeared in this magazine format throughout the 1970’s. Many of these classic stories were illustrated by the legendary artist Jose Gonzalez and have remained quite popular with comics fans to the present day. After a brief publishing hiatus, Vampirella returned in 1992 and quickly regained her reigning status as the queen of all female comics characters! In continuous publication since her early 90s comeback, Vampirella has been written by top talents including Alan Moore, Mark Millar, Grant Morrison, James Robinson, Jeph Loeb, Warren Ellis, and illustrated by fan favorite artists such as Joe Quesada, J. Scott Campbell, Michael Turner, Jae Lee, Adam Hughes, Mark Texeira, Joe Jusko, Arthur Suydam, and many more! A Vampirella feature film premiered on Showtime Networks in 1996, and the character continues to appear on numerous items of licensed merchandise. Earlier this year, Dynamite Entertainment acquired the Vampirella property from Harris Publications. Vampirella is now a part of Dynamite’s thriving comic book line-up, which will propel Vampirella to new heights just as we did with Green Hornet, The Lone Ranger, Zorro, Red Sonja and more.