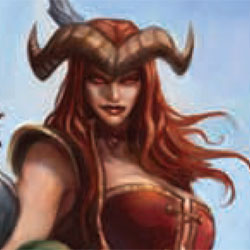 If you are going to tell a tale set in the Dungeons and Dragons universe, it better start in a tavern… Previously in Dungeons and Dragons: After saving a group of humans from gnolls and a dragon, the human, Adric Fell, Kahl the dwarf, Varis the elf, Bree the halfling, and Tisha the tiefling warlock have banded together to seek fame and fortune in and around Fallcrest.

In many of the D&D tales I’ve read, seen, and played, the adventure seems to always start off in a tavern where the group is given the chance to go out into the world to stop some evil, or find an artifact for some old man. In this first issue, the adventure comes to the party in the form of a random group of zombies that crash the group’s fun. By the time the issue is over, readers learn that the city is being infected with shadow – more specifically, energies leaking through an open portal between the Shadowfell and the Material Plane. The team needs to close the portal before the entire city is infected, and if they succeed, it could bring a big boon for the group.

There isn’t a whole lot going on in this issue as far as the story goes, it’s pure setup, introducing the reader to the characters, their quirky traits, and explaining a bit of the world and how it works. It may sound boring, but John Rogers is able to make the plot unfold in a very natural way without elements being forced, and I like the distinct voices he brings to the characters. There is a lot of humor in the issue – gentle ribbing between the elf and the dwarf, sarcasm between the love interests, with Bree the halfling stealing the show with her shenanigans.

Andrea Di Vito brings the entire world to life with his art in the issue. When creating a fantasy world, an artist can do just about anything, and it can be passed off as believable. However, considering the series is based on races that fans of role playing games already know, following the conventional look and design is very important, and I think Di Vito nails it here. The elf is tall with blonde hair, the dwarf short, with a full beard, and the tiefling is done so well, I expect more than a few fans will line up with requests for sketches the next time Di Vito appears at a convention.

The coloring brings everything together. The shading of each character matches their surroundings. At one point Tisha creates three rings to demonstrate the Material Plane, the plane above and the plane below. The colorists took the time to color Tisha in such a way that different parts of her body catch the light given off by the three colored rings. At first you don’t notice it, because it looks very natural, but when you dive into each panel for closer examination, this attention to detail shows everyone involved care about the end product.

If you are a fan of the D&D role playing game, there’s a good chance you’ve already picked up the first issue. That’s great if you did, as the book is aimed squarely at that target market. However, if you have never played Dungeons and Dragons, but you like sword and sorcery tales, then you should really buy this issue. It a perfect setup to a long adventure, and it just might pique your interest in heading down to your local gaming shop and finding a group to play with. I enjoyed this issue immensely (even if it does have zombies in it), and give Dungeons and Dragons #1, 5 out of 5 Stars.