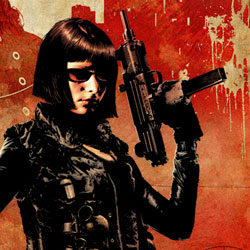 By Dynamite Entertainment on November 11, 2010 0 Comments

Jennifer Blood is a suburban wife and mom by day, and a ruthless vigilante by night!  Every day she makes breakfast, takes the kids to school, cleans the house, naps for an hour or two, makes dinner, puts the kids to bed, and kisses her husband goodnight.  At night she goes down to the secret compartment in the basement, tools up with all manner of high-powered weaponry, goes downtown and kills bad guys by the dozen- then comes home to her family.

The story is told in the form of her diary, a little pink one with a rabbit on the front. This suburban punisher is ready to be unleashed in a story that can only be told by the legendary Garth Ennis.  With incredibly compelling covers by Tim Bradstreet, look for Jennifer Blood #1 February from Dynamite Entertainment! 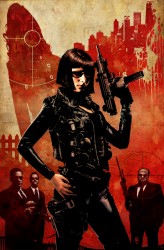 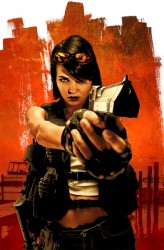 “I’ve been writing such grim, serious stuff for so long now that I fancied having some fun again,” says writer Garth Ennis.  “Pitch-black fun, yes, but fun all the same. Hence Jennifer Blood.”

“Garth has an uncanny ability to create compelling characters from scratch,” adds Dynamite President Nick Barrucci.  “From The Boys to Preacher – as well as re-defining an iconic character like The Punisher – we’re proud to be working with Garth on Jennifer Blood!  Tim Bradstreet painting the main covers is icing on the cake!”

More information including the entire creative team to be revealed in the coming weeks.