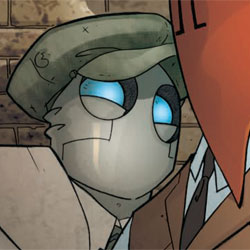 While the time tripping Atomic Robo tales featuring vampires from other dimensions and dinosaurs with a god complex are fun wild rides worthy of many major awards, it’s the supernatural tales that seem to work best. Previously in Atomic Robo: Proving he really is the best mind on the planet, Nikola Tesla invents the first atomic powered robot the world has ever seen. Long before he would fight terrors from beyond time and space, and before cracking skulls with Nazi scum, Atomic Robo spent his days studying science… SCIENCE!

IT’S THEIR BOOK, THEY CAN DO WHAT THEY WANT

While Telsa prefers that Robo study the sciences constantly, it’s clear in the early days of his life that Robo wants more adventure and action than his father/creator. Robo soon gets all the action he wants when he encounters the masked vigilante Jack Tarot, Gunfighter, and decides it is his destiny to join his organization to bring down those that seek to bring evil to the world.

In previous tales, whenever we’ve seen Robo, he comes off as a smug know-it-all, with writer Brian Clevinger adding in a good dose of comedic humor and timing that makes each series sing. This time, the humor is there – and there are some really great moments – but it is much more subtle than we’ve seen before. Robo is still discovering himself (NOT IN THAT WAY YOU PERV!), and comes off as an over eager ten year old, who won’t take no as an answer. The humorous moments come from the interactions between Jack, his daughter Helen, and Robo, and not in the one-liners or quips thrown about willy-nilly It may not be the knee slapper that some hope for, but the comedy timing works in this setting.

There are also some wonderful pulpy moments, too, including Jack’s dramatic warning to Robo to walk away or be drawn into a life he may not like. It’s the longest line in the entire issue, and is probably the most important.

One of the things that will surprise many long time readers of the series is we finally get to see Tesla’s face. In a past interview with Clevinger and Wegener, the duo had indicated that they wanted to keep Tesla’s face out of the series, so it is surprising to see him here. But that kind of goes with the rest of the issue – everything is a surprise, from the way the characters interact, the new heroes that are introduced, and the appearance of a crystal skull as the McGuffin of the tale. And yet, in that reveal, Clevinger sets up the cliffhanger as we don’t get to see the villain’s face. Anyone want to take bets that Edison is behind it all? If that is the case, then that makes another great turn in the story, as previously we’ve seen Edison, but not Tesla, making the creative teams choices that much more exciting.

Scott Wegener once again delivers some great art that is inspired by the time period the story takes place. Since many of the outdoor scenes occur near Tesladyne labs, it is nice to see some continuity in surroundings from the previous volumes. If I were forced to find anything wrong with the art in this issue it would have to be how clean the main streets are. Wegener does clutter up the alleyways, but the boulevards and surrounding architecture are just so darn neat and clean that those panels do tend to pull me out of the story. Tesla’s clean lab is one thing (the guy was a complete germaphobe), but the city should look more lived in and cluttered. But other than that one minor nit-pick, I still love what I’m seeing, and can’t wait for the day when I can actually afford to buy some of the original pages.

I’m someone that likes my pulp fiction with a healthy dose of science and supernatural. To make it more believable, both of those need to be researched and Clevinger and Wegener did their due diligence once again in this volume. From the look and shape of the crystal skull to the precise number of crackers Tesla has for his meal, this volume is shaping up to be another hit. I feel like I’m beginning to sound like a parrot when I talk about this series, but the message bears repeating again, and again – You owe it to yourself to buy this comic now. Don’t wait or it may be gone. Tell your local comic book shop to carry the series, and they won’t be disappointed. Atomic Robo: Deadly Art of Science #5.1 is terrific read and earns 5 out of 5 Stars.