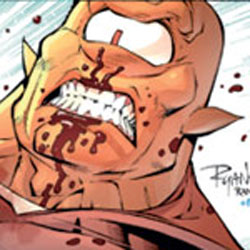 The Viltrumite War may be over, but the battle is far from over as issue #75 shows what happens when the switch is flipped from savage to berserker. Previously in Invincible: Convinced that the Viltrumites can be destroyed once and for all, a group of nine heroes from across the galaxy gather to take the fight to the Viltrumite home world.

Going into the fight the team knows that there is a good chance they aren’t going to all make it, and even though the fight is a bloody one, with many Viltrumites dying, nothing is really going to prepare for the way Oliver bites it in this issue. It comes as a complete surprise for a couple of reasons; first, readers have gotten to know Oliver during the time he, Omni-Man and Invincible were stranded on the desolate world, and second because of the way Kirkman let’s the action build perfectly to that moment.

Big credit for this dramatic reveal in the story needs to go to Ryan Ottley who created smaller than normal panels leading into the giant punch, and then delivered a half page panel that literally explodes all over the page – blood and guts literally spill out of the panel and into the gutter. Couple that with Ottley’s knack for serving up the truly bloody and often disgusting bits of body parts, and it makes for a moment that stops the reader, and the battle in their tracks.

YOU KILL MY BROTHER, WE’LL DESTROY YOUR PLANET

I do like the ultimate method for destroying the Viltrumite empire, it’s just a shame the heroes weren’t able to take out the enemy. As thick as the issue is, I was really hoping we were going to get some closure in this epic tale that has lasted nearly a year, but alas the final fight with the Big Boss is going to have to wait. Coupled with 36-page story are two back-up tales; Science Dog and Tech Jacket, which are nice additions to the issue, but pale compared to the epic main feature.

Kirkman has done an excellent job these past issues creating a slow build that burned like a fuse, leading up to this explosive issue. The issue isn’t bogged down with unnecessary dialogue, it certainly doesn’t drag at any point, and the four concurrent double-splash pages are epic.

The events in this issue are going to have some serious repercussions done the line, and is an issue every Invincible reader needs to own. Fast paced, epic space battles don’t come along every day… HA! Yeah, actually in comics they do, but in this case, this is the best I’ve seen in some time. Well worth your time, Invincible #75 is worth 4.5 out of 5 Stars.