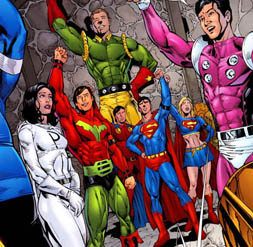 By Matthew Peterson on November 3, 2010 8 Comments One of the transformative moments in the history of the Legion of Super-Heroes came in the form of their first loss, the death of Lightning Lad at the hands of Zaryan the Conqueror.  Far from destroying the LSH (as it reasonably could have), Garth’s sacrifice instead catalyzed the remaining members to rededicate themselves to taking down pirates and space-whales and such.  Even though he got over it, it was really the moment that turned the Legion from Kal-El’s teenage social club into an honest-to-Klordny army against evil.  It also set the precedent that, unlike MOST superhero stories, there were very real consequences in the Legion’s world… Previously, on Adventure Comics:  A trip to the past to recruit the greatest hero of all time actually led to the Legion of Super-Heroes finding a teenaged version of Superman instead.  This young Kal-El joined the LSH on a weekend warrior basis, wearing his costume in their time and fighting alongside the team against their myriad foes.  The question this raises, of course, is whether the costume itself is now a paradox, since the team gave it to him based on the one he wore when he was an adult, a costume that wouldn’t exist until his mom made it in his subjective future.  Did he model his grown-up suit on the one the Legion gave him which was based on his grown-up suit which was based on the one the Legion gave him which was…  Nevermind.

As for the Atom, Ray Palmer has run afoul of a secret organization that has stolen his size-change technology for use in their nefarious activities.  Of course, unlike his suit, their shrinking powers are fatal, causing the ant-sized terrorists to burst like a sausage in the microwave upon use.  More than that, the group has among its members his beloved uncle Dave, the man who treated him like a person when his abusive father wouldn’t.  Now, with The Colony (not THAT The Colony) on his tail, The Atom and Uncle Dave have travelled into a tiny Genesis-world created in case of armageddon, being chased by murderous guys who call themselves ants…

Recent issues of Adventure have dealt with the “in-betweens” of the Legion’s early years, showing us moments like Saturn Girl hooking up with a teammate, Chameleon Boy forming the Espionage Squad and other moments only hinted at in the regular weird-ass broken chronology of the Legion in the Silver Age.  As I began reading this issue, I was filled with trepidation at the thought of pasted-on melodrama on 50 year-old stories.  As tears rolled down Saturn Girl’s face and she wondered how many more heroes she killed, I started to worry more.  Then, something weird happened:  Supergirl appeared.  Not just Supergirl, but the current mini-skirt and half-shirt version of Kara Zor-El from Superman/Batman circa 2008.  I don’t know why this struck me as so odd, other than the fact that it reinserts Supergirl officially in LSH history, restoring another piece of pre-Crisis continuity.  Except that it doesn’t.  Bygones…  The team sets up the weird little lightning crypt for their lost member, then takes off to give Zaryan a piece of their collective mind.  And fists.  Mostly fists…  Supergirl, Ultra Boy and Kal-El rock the house, while Mon-El puts in a quick cameo appearance, and Brainiac wonders how much stupider his team can possibly get.  We get a pretty detailed retelling of Adventure #306, leading into a bad-ass power walk for Saturn Girl as she decides to be the best leader her team has ever seen, and not coincidentally to find a cure for her mostly-dead boyfriend.  It’s not as bad as I thought it could have been, and the art is pretty delightful.  Still can’t get past that Supergirl thing, though.

Oh, Atom, Atom, Atom.  What in the world are you doing in this book, anyway?  Returning to his old sword-and-sorcery ways, he takes on the members of the Colony hand-to-hand, until they start blowing to pieces again.  Ray manages to save one, and pumps him for information, revealing that the ultimate aim of the project is to get Ray’s stash of white-dwarf star matter so that they can start shrinking without, y’know, dying.  Atom watches in horror as the last guy dies, but not before destroying his size-belt with a stab from a sai.  Of course, the angle of the shot seems like it would also disembowel Ray, but nevermind.  Uncle Dave acts weird, says his belt was mysteriously destroyed as well, and suddenly disappears as The Atom is attacked by giant robotic insects.  Yeah, there’s NO way that Uncle Dave is involved in anything untoward or inappropriate at all, is there?  Gyaah.  Still, it’s well-drawn, so we got that going for us…

When DC announced that Adventure Comics would be losing it’s Co-Feature, I wasn’t terribly upset, as aside from Mahmud Asrar’s art, there’s not much going on in the Atom story.  I’m just not feeling the whole “lost family member” vibe, and the Colony’s motives have been inscrutable from the beginning, making it all very obscure.  Add to that the fact that I really want to know how Ray would respond to the brutal murder of his protege, and this whole arc is kind of a bust.  As for the Legion story, it’s one of the strongest (if not THE strongest) of this arc, with realistic emotion from teenagers who lost one of their own, that never quite makes it into the realm of melodrama.  My minor complaints are the high-profile of the team’s super-strong & invulnerable members in the team sequences (there are a lot of players in the LSH, and it always suffers when we focus only on the powerhouses) and one minor captioning problem.  I’m sure that some readers didn’t even notice, but Invisible Kid I, Lyle Norg, is identified as Invisible Kid II, Jacques Foccart, which bugs the crap out of me, but isn’t a fatal flaw.  All in all, it’s an imbalanced but not terrible issue overall, with excellent art throughout the book.  Adventure Comics #520 is slightly better than okay, but better than it might have been, earning a composite score of 3 out of 5 stars overall.  If we get Mon-El out of the zone, this is potentially really good stuff…

Faithful Spoilerite Question Of The Day:  If I know that the reveal will be anti-climactic and probably a bad idea, why do I want to see the re-telling of Supergirl’s joining?  Am I just a glutton for punishment?