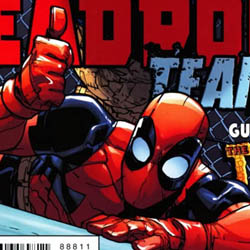 By Matthew Peterson on November 2, 2010 2 Comments

Or – “Clobberin’ Time Versus Super-Happy-Fun Time!” And it’s time to talk about the orange pile of rice krispie treats they call Benjamin J. Grimm…  The ‘Pool knows what happened on the day editorial told you that you were teaming up with the ‘Pool!  The heavens opened, and the Earth shook, and JOE QUESADA himself looked down and said, “Bob?”

“IT DOESN’T MATTER WHAT YOUR NAME IS!”

What matters is, you’re going into the ring with the most electrifying man in Marvel Entertainment, the Merc With The Mouth, the Mutant What Does The Shootin’, The one and only Rob Liefeld SURVIVOR… Previously, on Deadpool Team-Up:  Wade Wilson has made a career out of shooting things repeatedly while making snotty remarks to the voices in his head.  Ben Grimm has made a career out of punching the living $#!+ out of things while making snarky remarks to his de facto family of super-powered misfits.  Seemingly a match made in heaven, as the Merc With a Mouth and Aunt Petunia’s Favorite Nephew have much in common.  They’re both deformed by the same process that made them powerful.  They’re both possessed of a wicked wit, belying their common upbringing.  They’ve both made careers out of repeatedly appearing everywhere in the world, seemingly at the same time.  (Remember, Benjy even teamed up with Doc Savage, regardless of the restrictions of time, space, dimension, and editorial good taste.)  They also share a taste for the finer things in life, including the phenomenon that is professional wrestling.  Ben is himself a former Unlimited Class Wrestling heavyweight champion, while Deadpool’s rants often remind me of the Ultimate Warrior.  What happens when these two titans hit the ring in search of one last shot at glory?  I don’t know for sure, but somebody’s gonna get beat like a government mule!

What’s a government mule?  It’s what ya get BEAT like when you’re in a slobberknocker!

Our story starts in a packed arena which I’m going to call Madison Cube Garden, because I can.  The Unlimited Class Wrestling Federation has come to town for their annual blowout Mega-Match Pay-per-view event, and they’ve pulled out all the stops to bring the best show, even hiring former champion Ben Grimm to handle color commentary.  The wrestlers come to the ring, and we find that the upstart heel (that’s villain) tag team known as the Armageddonists are managed by Deadpool himself!  Why?  According to the flashback, DP has a love of both butt-kicking and instant forgiveness, two staples of the Sports Entertainment package.  The match goes in the Arma’s favor, due to the cheating and distracting tactics of their manager, leaving the Thing disgusted by it all, only to pull back in shock as his play-by-play man tells him it’s all in the script.  Both Wade and Ben are horrified (for different reasons) to hear there’s a script for it all, but their dismay is sidelined by the arrival of a strange creature and a robot in mid-ring.

The machine identifies his companion as “Max Intensity,” and informs all present that unless the wrestlers step forth and fight his champion, that everyone in the arena will be vaporized.  The entire roster of the UCWF gets taken down in shot order, causing the Thing to leap into the ring to defend the innocents and the honor of wrasslin’ as he knows it.  “Thing ring, do your thing!” cries Deadpool at ringside…  Heh.  The fight goes well until the devious Max splits in half, amoeba-style, budding into TWO disgusting monstrous creatures, and causing Deadpool to leap in for some tag-team madness!  Things (no pun intended) quickly get out of hand, and both our heroes resort to their finishing moves:  Ben’s spinning spinebuster and Wade’s bag of high-explosives.  One Max is pinned, the other ‘sploded, and the robot manager ends up getting a UCWF contract for outer space pay-per view action from the unscrupulous new federation owner.  Ben watches in sad resignation as The ‘Pool cuts a (highly referential) promo as the story fades to black…

I don’t expect a lot out of most Deadpool stories, save for a clever hook and some snappy dialogue.  This story has SOME of it’s wrestling patois down, but as with nearly every comic book rendition of the squared-circle, it comes apart in some of the details.  I like the Thing/Deadpool character dynamic, but the concept of an alien coming to Earth to defeat our greatest champion is pretty threadbare.  For my money, the best part of the issue is Ben’s response to Deadpool remarking about the “meet, misunderstand, fight” dynamic of superhero team-ups: “Don’t tell me about team-ups!  I was doin’ Two-In-One’s before you were a regret in your daddy’s mind!”  HA!  Writer Cullen Bunn puts together some interesting dialogue, but nothing with real bite, and the art is…  troubling.  We get a spindly Deadpool, a massive but undefined Thing, some very flabby wrestlers and Max Intensity’s anatomy is just plain hard to look at.  I suspect that there was an intentional attempt to “draw funny” at work in this issue, but the resulting art is muddled and difficult to follow.  Deadpool Team-Up #888 has good intentions, and nearly hits the mark a time or two, but leaves me with an overall disappointed feeling, earning only 2 out of 5 stars overall.  It’s not terrible by any means, but there’s definite room for improvement from these creators.

Faithful Spoilerite Question Of The Day:  Can a premise that’s shopworn and cliche deliver a great reading experience?  (Examples are welcome…)