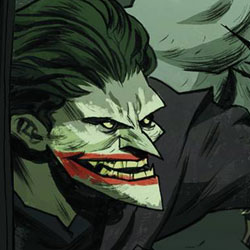 Locked in a never ending battle of good versus evil.

The city of Gotham has been plagued by mooks who think it is rather cool to get jazzed on Joker Juice and go wilding through the streets. Meanwhile someone pretending to be Batman is calling for all good citizens to become vigilantes and protect their fair town. Something is going to come to a head, and it does in the final installment of David Hine’s Batman: Impostors arc. Previously in Detective Comics: A fair has just been set up on the outskirts of Gotham, and with the city needing some relief from all the Joker riots, it’s a welcome diversion – except everyone knows something bad is about to go down.

LONG WAY DOWN, ONE LAST THING

With the Impostor Joker Juice filling the fairgrounds all hell breaks loose, as the Joker mobs turn more insane than before. “Someone” saw fit to stock the fairgrounds with all manner of weapon, and the widespread panic and killing is just the thing the Batman Impostors need to break out their weapons and crack some skulls. The level of violence that Hine depicts in this issue is really insane, as no one is safe in the crowd. It seems as though the creator of the Joker gas, Dr. Kaligari, might get to see his creation/experiment play out in full – but as with any tale the sees fit to punish the wrong-doer, Kaligari is killed by his vary creations.

There are two interesting things that writer David Hine does in this tale that seems like a perfect fit for a Batman tale. The first is the reveal that Impostor Joker is Winslow Heath, a victim of the real Joker’s gas from years ago. But even more twisted than this reveal is the revelation that Heath is also Impostor Joker. It’s a nice twist and once it is revealed, Heath’s (and Hine’s) message is clear; The Batman and The Joker are one and the same, not being able to survive without the other, and their battles will continue to play out again and again, not unlike a wheel going ‘round and around. It’s a theme that readers have seen in other Batman tales, and I’m really surprised that it took Hine four issues to spell it out for us.

The second, and probably more interesting element Hine adds to the story comes at the end when Batman questions Alfred on who really is to blame – did Batman create the villains, or did the villains create Batman? And more importantly, with all the innocents that get caught in the crossfire, who is to blame? Hine, through Alfred, does present an interesting answer in that the citizens of Gotham don’t have to stay in the city; they can always go someone else. It’s a cheap and easy out, but it is an answer that works in the scope of superhero comics, and one that I can put up with for now.

What really sets Heath off in this issue isn’t the fact that the Joker disfigured him and ruined his life, but that the love of his life was also caught up in the fray, and Batman was too busy saving Heath to know that his girl was paralyzed and would go undiscovered by rescue workers, eventually dying on the rooftop where it all went down. It’s a very morbid flashback, and a turn in the story that I don’t think anyone was expecting, and it become even more disturbing when Scott McDaniel brings the words to life. The visual implication that crows fed on her body while she was still alive, and the reveal that Heath carries the body around and has conversations with her jump out at you in McDaniel’s recognizable style.

But his style is also part of the problem, as the skeletal remains of Heath’s love comes off almost comical in the closing pages of the book. I’ve mentioned before that McDaniel has a style that you either love or hate, and there are going to be times when certain things just don’t work. For the most part, I like his human figures and faces, but the dead just don’t come off as gruesome in his hands.

Though it took readers four issues to get to the punchline, I still think Detective Comics #870 is worth a read, if for nothing else than to ponder the question the sanity of the citizens of Gotham – or really any city that is constantly being destroyed by some crazed villain or force. The writing is a tad jumpy in places, but I do like the ending that could have the Jokerz coming back in a future story line (Batman Beyond, perhaps?). McDaniel does a solid job with the living, and mayhem and destruction feels looks real enough. Overall, Detective Comic #870 isn’t bad, and worth of 3 out of 5 Stars.