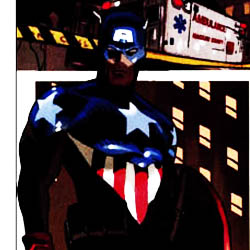 Or – “Why It’s Best Not To Rile Ex-Nazi Jerkwads…” Thanks to the efforts of Helmut Zemo, the secret of the new Captain America is out, and the world knows that Bucky has graduated to the role of his mentor.  They’re also privy to all the horrible things he did as the Winter Soldier, official assassin of the Soviet Union for many years.  The world isn’t thrilled with a killer in the ranks of the Avengers (at least one not named Howlett, anyway) and the authorities would like to have a few words with the former mascot of Camp Lehigh… Previously, on Captain America:  Baron Heinrich Zemo finally had his foe, Captain America, in his evil clutches, and had chained both the hero and his kid sidekick to an experimental “buzz bomb” plane.  Launched into a kamikaze attack on their own forces, Captain America was able to pull loose, leaving Bucky to try and defuse the bomb.  The boy failed, and Cap was frozen in Arctic ice for decades, eventually getting thawed at the dawn of the current age of Marvels.  Bucky, for his part, lost an arm and was remanded into the custody of Russian General Lukin, who had him brainwashed and rebuilt as a cyborg killer called the Winter Soldier (not to be confused with Winger Soldiers, fans of Kip and his band back in the late 80’s.)  His conditioning was finally broken in recent months, just in time for the sidekick to watch his mentor die on the steps of a courthouse.  A few complicated things have happened since then, but Bucky’s life has been turned upside down as his activities as Russian assassin have come to light, thanks to the machinations of a second Zemo, the son of the original.  What do you do when your sentinel of liberty is a stone cold killer?

Well, if you’re the media in New York City, you surround the Avengers Mansion with a 24-7 siege of schmucks with camcorders and digital audio tape, hoping that a hero falls into your clutches.  Sadly for them (and, kinda, for the Avengers) what they get is Hawkeye, the loose cannon loudmouth who isn’t afraid to speak his mind:  “Vultures!  Yer all vultures!” cries Clint as he arrives for a super-secret briefing.  Steve “Not Captain America” Rogers, Tony “Still Iron Man Whether You Like It Or Not” Stark and Natasha “Scarlett Johanssen Was So Hot They Forgot To Give Me A Codename, How Sexist Is That $#!+?” Romanov have convened to discuss the truth of the situation.  Hawkeye rightfully (and entertainingly, thanks to writer Ed Brubaker’s dialogue) rakes his pals over the coals for trying to hide the fact that the man in the clothes of Captain Freakin’ America is a former Soviet assassin, but Natasha has the last word:  “Did James not deserve a second chance?  Are you or I or ANYONE in this room in the position to say that?”  It’s a strong point, and one that I loved for it’s bluntness, for the knowledge of Marvel history (Remember:  Ex-Russian Spy, ex-supervillain, ex-government strongarm and Steve “I quit being Cap again, must be time for lunch” Rogers, here) and for the subtle acknowledgement of Natasha’s feelings for Bucky.

While being the center of attention and conversation, the Captain America breaks up a neo-Nazi ring in Manhattan, all the while brooding about what is and what should never have been in the first place. When Steve arrives to talk to him, Bucky refuses to run or hide from the eyes of the public.  “It’s time for me to face the past…  No matter what,” says Bucky, and we cut to the next morning, as the media firestorm erupts again, this time showing Captain America turning himself into the authorities.  It’s a very strong piece of characterization for Bucky, and really shows the change in his nature, but it’s disturbing to think what could happen.  After all, he’s also responsible for the terrorist bombing of Philadelphia back in issue #7 or so, and this is not the kind of world where that sort of thing goes away unpunished, even in the Marvel U.  Steve Rogers got a promise from the President that they’d try and give Bucky a venue where the truth can be brought to light, but the issue ends with the cackled of Red Skull’s daughter Sin, indicating that she or her Daddy might still possibly have something to say about Bucky’s perceived innocence in all of this…

First off, this issue is a stunning visual experience, thanks to the work of Daniel Acuna (can’t do the little ~ thing for some reason, sorry Mr. A) who makes the nighttime spectacle of Cap fighting skinheads a thing of beauty, and even gives us a tense scene between Mr. Rogers and Mr. Obama that I kind of love.  In the political climate of today, this book has to skirt a thin line (after all, nobody is allowed to be a moderate anymore, you have to be a lunatic hating somebody on the other side) without actually taking an alienating stance, and this issue is very well handled in that regard. Ed Brubaker has been building this story for over six years now, moving organically from point to point and giving us some fine comics reading in the journey, and this issue is a lovely one.  One wonderful bit of dialogue reveals the truth about the JFK assassination in the Marvel Universe (think Secret Invasion), the kind of touch that allows tiny bits of humor to show in even the most dramatic scenes, something I greatly enjoy.  Even though there’s a lot of talky-talky-lip-flappin’, it’s productive talking, reminding us of salient points of continuity and setting a strong tone for the trial to come.  Captain America’s been torn apart, folks, and he’s a court jester with a broken heart, a cyborg arm, and gritted teeth, but it’ll take more than determination and grit to pull him through.  Captain America #611 is a complex issue, using the main character sparingly, but making it all about him in the long run, earning 4 out of 5 stars overall.  I sincerely hope that this doesn’t end with Steve simply picking up his shield again…  That’s far too easy, and a cheap copout move to boot.

Faithful Spoilerite Question Of The Day:  Can Bucky be held responsible in a court of law for actions under Lukin’s mind control?