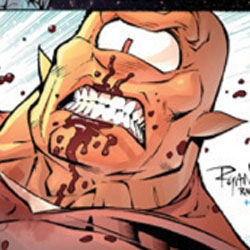 Image Comics released a sneak peek of titles arriving this week. Take the jump for a look at Cowboy Ninja Viking #10, Godland #33, Invincible #75, and more.

COWBOY NINJA VIKING #10
story AJ LIEBERMAN
art & cover by RILEY ROSSMO
24 PAGES / FC
$3.99
Double crosses, blown up boats and Bangkok strippers…
Duncan, Nix and Ghislain survived it all, but will they survive what comes next? As the fallout from the failed mission continues, Duncan learns a new secret that will change everything he thought he knew about being a Triplet.

Collecting the critically acclaimed club caper Under The Radar calls “a nice surprise!” and iFanboy says is “a testament to the potential for excellent stories that can be told in comics!”

GØDLAND #33
story JOE CASEY
art & cover TOM SCIOLI
24 PAGES/FC
$2.99
BOOK THIRTY-THREE: DØGLAND
Sometimes, there are no words… Thank Iboga we’ve got a cover to show! And what a cover! Guess where Commander Adam Archer is going…?
GØDLAND’S TICKING CLOCK IS POUNDING IN THE EARS OF ALL HUMANITY!

SAVAGE DRAGON: DRAGON WAR TP
Story ERIK LARSEN
art & cover ERIK LARSEN
128 PAGES / FC
$16.99
Witness Savage Dragon’s transition from menace to threat! This volume collects Savage Dragon’s battle with Overlord’s Dragon army for supremacy, a confrontation with Brawn, a skirmish with the Golden Age Daredevil, and a shocking slug out with Detroit’s Deadly Duo! It’s the beginning of a bold new era for Savage Dragon—one in which the hero becomes the villain and the whole series is turned on its ear!
Collects SAVAGE DRAGON #157-162