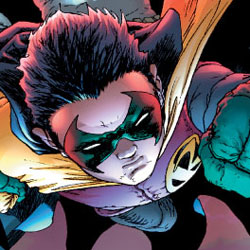 Grant Morrison wraps up his run on Batman and Robin this week with the release of issue #16.  DC Comics released a sneak peek for you to take a look at, and if you like giant bats, then this issue has you covered.

BATMAN AND ROBIN #16
Written by GRANT MORRISON
Art by CAMERON STEWART
Cover by FRANK QUITELY
1:25 Variant cover by ETHAN VAN SCIVER
Don’t miss this fantastic finale as BATMAN AND ROBIN’s storyline connects with THE RETURN OF BRUCE WAYNE! The climactic showdown between Batman and the Black Glove is finally here. It’s payback time for The Dark Knight as Batman and Robin face the ultimate evil. Will Damian betray his father’s legacy? Will Bruce Wayne return just in time to see Dick Grayson die? Plus, The Joker and Professor Pyg!