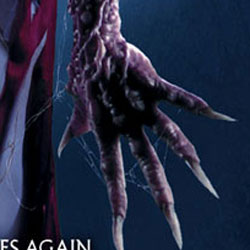 We’ve known that the Maximum/Image/Homage Comics/Wildstorm published Darkchylde series was getting the movie treatment, but now word on the street has John Carpenter going behind the lens to direct the feature.  All of this came about after the Darkchylde test footage that was released featuring the work of the Weta Workshop in New Zealand.

John Carpenter says, “Randy Queen’s hijacked angel, Ariel Chylde, is the best young female character since Laurie Strode in Halloween. Bringing Ariel and her dark mysteries to life should be quite an adventure for us all.”

Adds Queen, “I’m beyond thrilled that John Carpenter, one of our most important, and legendary genre directors, and the man responsible for such landmark films as The Thing, and Halloween has come on board with Weta Workshop to help bring the nightmarish tale of Ariel Chylde to the silver screen. As a horror fan, the thought of Carpenter and Weta together, beautiful dreamscapes, and multiple transformations, makes me incredibly excited. There is a reason nearly his entire catalogue has, or is being remade, and it’s because Carpenter is a genius.”

Reprints of the previous Darkchylde stories are currently being collected in trade for a January 2011 release from Image Comics. via Shock Till You Drop