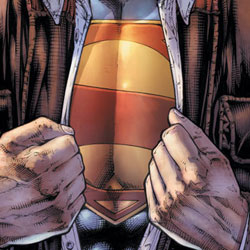 DC made a wise decision to return the multiverse to continuity. For one thing it allowed all the great Elseworlds and Earth-2 through Earth-Z stories to be told, but it also gave creators a chance to tell new alternate continuity tales that haven’t been explored yet. This past week saw the release of Superman: Earth One hardcover released, and though the price was steep, it was well worth the price for entry. Previously in Superman: You know the story – sent to Earth to avoid dying on the exploding planet Krypton, young Kal-El grew up with powers far beyond those of normal man.

EARTH ONE IS NOT EARTH PRIME

When it comes to retelling the origin of Superman there are a couple of ways you can go about it; you can retcon current continuity, spread it out over six issues and hope the fans buy into the new continuity, or you can retell the origin in a parallel dimension. It’s the later that J. Michael Stracznski opted to go for in his interpretation of Superman’s first great adventure.

In Superman: Earth One, young Clark is looking for his place in the world. With his powers he can have any job and career that he wants from pro football player, to all-star researcher. Readers get to see employers fall all over themselves trying to get Clark to sign multi-million dollar contracts, but it’s the job at the Daily Planet that peeks his interest. I really like the fact that there are things that Clark doesn’t excel at; writing being one of his weak points. For a while I was concerned that Straczynski was simply going to make Clark someone that could do anything he wanted to, but fortunately, he knew when to pull back.

Scattered throughout this young man’s adventure in Metropolis, we’re given flashbacks to Clark’s youth, and we see his upbringing, and discover bits and pieces of what makes Superman, simply a man. And as cheesy sappy as some of these moments are, they are moments that can bring a tear to the eye and make you pull for this small town boy. Some have pointed out that this version of Superman seems too Emo for their taste, and while Clark is sullen and introverted, it’s only because he hasn’t found the thing that makes him happy. For about half the book, that’s the person we are presented with – someone who needs an Earth shaking event to knock him out of his malaise.

That Earth shaking event is the sudden attack by an alien armada. Turns out the alien in this story was at war with Krypton and plotted with another alien race to bring about Krypton’s destruction in exchange for power and knowledge – providing every Kryptonian in the universe is eradicated. For 20 years, the alien race has searched for the young Kal-El, and it is only now that they have found him.

What follows is a great and powerful slug-fest that really gives Superman a run for his money. In Earth One, Straczynski doesn’t give Superman the power to fly through the Sun, or to lift a mountain above his head without breaking a sweat. Clark does feel pain, he does get injured, and it takes the faith and belief of those around him that ultimately helps him save the day.

I can’t stop thinking about this story. It was so well done, as it pulled on the emotional strings, while giving those who have only a passing knowledge of the Superman mythos something they can build upon and enjoy. The characterizations felt very modern, and the dialogue was fresh and snapped at just the right moments – whether it was Perry White and Lois’ exchange about editorializing the news, or Ma Kent telling Clark to do what makes him happy. The only thing that was sort of frustrating was the over use of splitting a sentence with the final word or two carrying over to the next panel or next page. I understand it was used to help make the story feel like one continuous moment, but it became tiring after a while.

ART WORTHY OF A HARDCOVER

If you are going to charge readers $19.99 for a 136-page story, the images better be worth it. Shane Davis more than gives the reader their money’s worth in this book. Every page is a treat to examine as the detail in the landscape and cityscape gives the world life, while the quiet character moments, and fantastic expressions allow the reader to fall deeper into the story.

While I’m not fond of the “villain” in this story, I do find the juxtaposition of the character design to be very interesting. The alien’s wings and costume design will remind many of an angel, even though his actions betray that impression. But is he really? Before his defeat he proclaims the Kryptonians were the real evil and he is just doing his part to protect the rest of the universe, and with Superman’s overuse of heat vision in this story, the red devil impression might cause a few to hesitate over the possibility that there is a dark legacy yet to be revealed somewhere down the road.

While Davis’ pencils are nice, and the inks are done well, the coloring is something we don’t normally see in comics, it is something that doesn’t sit particularly well with my tastes. I do appreciate what is going on, even if it does seem a bit smeary overall.

I simply can’t stop thinking about this story. Straczynski did not give us an open and shut story in this book. There are still many story elements that go unresolved, and I like that open ended feeling. DC has plenty of other Earth One tales to tell featuring other heroes in the DC catalogue, but if DC wanted to replicate Marvel’s Ultimate Universe, this is a fantastic story to kick things off. When all is said and done, I really do want to continue to read the adventures of Superman in this alternate Earth. While $19.99 may seem like a mighty price to pay in this economy, the story and art inside are well worth it. This is a book that needs to be read and celebrated and is definitely something you need to go out and buy. Superman: Earth One is deserving of 5 out of 5 Stars.