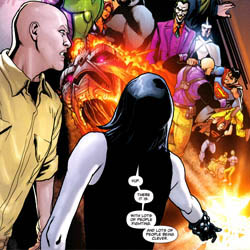 Back in the long-lost late 80’s, Alan Moore was the vanguard of a British invasion in comic books, which eventually led to the creation of an entire imprint at DC.  The Vertigo characters initially existed in the mainstream DCU, but at some point, it was decided that their world was an entire separate reality.  Occasionally, we have seen some crossover, but mostly their realities have remained distinct of one another, which is why my interest was piqued by the solicits for this issue.  I haven’t been following the adventures of Lex Luthor closely, but my internal fanboy wants to know how the new world(s) order is going to shake down… Previously, on Action Comics: Lex Luthor has long been angry/jealous of the super-powers that his old pal Clark grew up to wield, but his experience with the orange power ring during Blackest Night has completely messed up his head, showing him an entirely new reality of power.  Lex’s fleeting brush with the alien energies has led him to devote all his energies to trying to recapture the ultimate power: the energy that created and enpowered the Black Lanterns.  Last issue, Lex’s quest led him to cross swords with another conqueror (albeit a more hirsute one) in the form of Gorilla Grodd, an interaction that left the head of LexCorp dead as a mackerel.  For most characters, that would be the end, but even his mortality isn’t enough to stop the plan of the nefarious nattering nabob of negativity known as Lex Luthoooorrr!

Our story opens with Lex regarding his own body, as the member of the Endless known as Death smiles and patiently tries to explain that he’s looking at himself.  The conversation between the ultimate super-villain and the character who, by her very existence, is the antithesis of melodrama is very interesting, as Lex tries to bully, cajole, and even manipulate her into doing his bidding, while Death refuses to give him anything to work for.  Writer Paul Cornell builds Lex’s anger realistically, but Luthor quickly realizes it won’t help him, and he refuses to give in.  I kind of like the iron will portrayal of Luthor here, especially given his attempts to bargain with Death.  When asked what she needs from him, Death responds, “A pony.  A magic pony.  A magic pony who SINGS…”  Lex immediately attempts to figure out how he can create such a thing before she shuts that avenue down as well, having worked him through all the stages of grief save one:  Acceptance.   Lex angrily tells her that he doesn’t DO acceptance, and Death reveals her true motive, deciding to ask Luthor a few questions of her own…

Things get a little weird as Death shows Luthor a series of possible afterlives, one a paradise, another a world of simple joys, but the mind of Luthor won’t allow him to accept any of it.  “What’s the catch?” asks the bald one, telling Death that whatever it is that she does, it’s time to do it, to send him where he goes.  In a wonderful little touch, she simply tells him that this was a test, a “preliminary check” on him, and serenely reminds him that she never SAID he was actually dead.  Lex awakens in a hospital, confused but more certain than ever that he is on the right track to the power he seeks.  In the Jimmy Olsen backup strip, there’s some claptrap about an intergalactic party girl who travels from world to world leaving devastation in her wake…   I’d be more interested if Power Girl hadn’t faced the same thing several months ago, and if it weren’t a bowtied Jimmy Olsen in the main role.  The alien girl’s word balloons are rendered in a particular difficult font to read, and Jimmy comes up with a plan to save the world which isn’t half-bad, verging on clever, even.

All in all, there’s none of the explanations that I kind of looked for going in, but the story was well-done as well, taking Lex through the stages of coping with Death, all the while keeping him in character and maintaining her mystique in the process.  The art by Pete Woods is excellent throughout the first feature, and for all my problems with plot and fonts in the backup, the art is very peppy, and makes Jimmy look really good, as well as delivering some great alien technologies and such.  It’s been a while since I picked up Action Comics, but I have to say, this issue wasn’t a disappointment at all, even if it didn’t go where I kind of wanted it to.  Action Comics #894 takes two supporting characters and puts them center stage successfully, and for that it earns a fine-and-dandy 3.5 out of 5 stars overall.

Faithful Spoilerite Question Of The Day:   Do the Vertigo and DC Universes work better separate, or together?