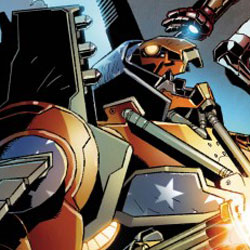 Marvel Comics released a sneak peek of Invincible Iron Man #32 from the team of Matt Fraction and Salvador Larroca.

INVINCIBLE IRON MAN #32 (SEP100629)
Written by MATT FRACTION
Art & Cover by SALVADOR LARROCA
It’s taking the combined might of War Machine and Rescue put down Detroit Steel once and for all, but will a stunned and surprised Tony Stark be able to take out a small army’s worth of murder drones on his own? Suddenly, it’s an all out war of the armored as Hammer Industries unleashes their final gambit on the one and only Iron Man — and they’re in it for scorched earth, not superiority. No one is safe as Tony Stark fights for his friends, his legacy and his very next breath this November, only in Invincible Iron Man #32!