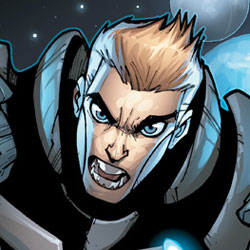 Take the jump for the complete cover gallery.

Already premiered in October is STAN LEE’S SOLDIER ZERO. This ongoing series, written by DOCTOR WHO and ACTION COMICS scribe Paul Cornell with art by SUPERMAN artist Javier Pina, tells the story of a wheelchair-bound astronomy lecturer who finds himself in a freak accident that bonds him with an alien weapon of war.