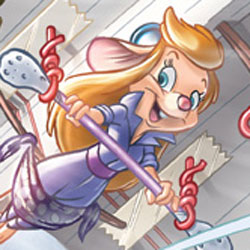 It’s the return of your favorite furry flatfoots in an all new original ongoing series! Coming on the heels of BOOM!’s bestselling DARKWING DUCK ongoing series, BOOM! continues the the Disney Afternoon Revolution with CHIP ‘N DALE RESCUE RANGERS as the diminutive detectives embark on all-new original adventures! This is the series that will have you singing that song you can never forget: ‘Sometimes some crimes go slipping through the cracks. But these two Gumshoes are picking up the slack. There’s no case too big, no case too small, when you need help just call -Ch-ch-ch-Chip ‘N Dale Rescue Rangers!’