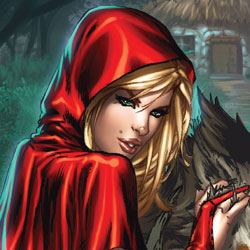 Zenescope Entertainment has announced it has a brand new series spinning out of the Grimm Fairy Tale series. Grimm Fairy Tales Myths and Legends will feature Red Riding Hood in the first story arc, and will be written by Raven Gregory, with interior art by David Miller.

And if you think Grimm Fairy Tales has interesting covers now, wait until you see what J. Scott Campbell, Eric Basaldua, and Mike DeBalfo are offering up for the first issue.

“I can’t tell you how excited I am to be apart of this. Not only do we get to go back and revisit some of the series most popular characters like Red Riding Hood but we get to explain the reasons behind why these characters were chosen by Sela in the first place,” says writer Raven Gregory. Tim Bradstreet covers Damn Them All