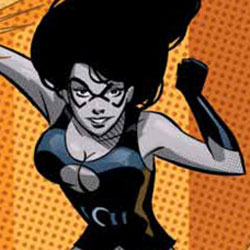 Boom! Studios sent Major Spoilers a sneak peek of Do Androids Dream of Electric Sheep?: Dust to Dust #6, Dracula: The Company of Monsters #3, Finding Nemo #4, Incorruptible #11 and many more titles that arrive in stores this week.

John W. Campbell Award-nominee Chris Roberson’s expansion of the world of Philip K. Dick’s acclaimed Do Androids Dream of Electric Sheep? In this issue, another piece of the definitive science fiction event of 2010 is revealed. Charlie Victor and Malcolm Reed continue their pursuit of the renegade androids, but it becomes unclear which side each of them is on…

From the mind of Kurt Busiek, the all-new ongoing horror series continues! Revived, enchained and seemingly tamed, the Barrington Corporation believes they have Dracula under their control. Which is just what Dracula wants them to think. As Dracula gets his pawns into place, Evan Barrington races to discover his true plan before it’s too late! It’s bloodsuckers vs. bloodsucker, as Busiek brings an incredibly modern spin to the Dracula mythos!

What’s the deep dark secret awaiting Dory within the mysterious depths of the ocean? Nemo, Marlin, Squirt, Bruce, Gil and Pearl explore the strange and creepy recesses in hopes of finding out what sinister secret lies in the unexplored areas of the deep.

The super-villains of the world are galvanizing in the wake of Plutonian’s rampage on earth. Only one man can stop them. Formerly one of their own, Max Damage turns up the heat against his one-time criminal colleagues, and teaches them what it means to be INCORRUPTIBLE! Don’t miss this companion series to Mark Waid’s Eisner-nominated IRREDEEMABLE.

TRUTH AND CONSEQUENCES FINALE! The Underminer stands on the brink of ultimate victory, and the secrets he’s revealed to the Parr family have left them shaken to their very foundation. Will they band together in time to stop the Underminer’s doomsday weapon, or will the surface world fall? This is a big one, leading directly into next month’s rise of the Unforgivables!

It’s a crisis of multiple mice as “300 Mickeys” reaches its startling conclusion! With the help of his pal Eega Beeva, Mickey must track down his clones before their uncontrollable growth can threaten the entire planet. But how can Mickey get rid of these independent impostors…without destroying a part of himself?

Join Woody, Buzz and the gang in all new adventures, as they compete for a kiss from Bo Peep, visit the natural history museum and more, in all new never before seen adventures! With Toy Story 3 burning up the box office, it’s time to check out the series critics are calling “The smartest kid’s book on the stands”