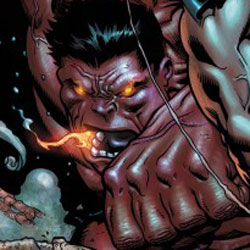 Marvel has released a sneak peek of Hulk #27 by Jeff Parker, with art by Gabriel Hardman and Mark Robinson.

HULK #27 (SEP100620)
Written by JEFF PARKER
Penciled by GABRIEL HARDMAN & MARK ROBINSON
Cover by ED McGUINNESS
The critically acclaimed creative team of Jeff Parker and Gabriel Hardman team Red Hulk with Steve Rogers, Thor, and the brilliant Dr. Bruce Banner to put and end to the Intelligencia’s nefarious plans! Except in order to do so, Red Hulk must dive to the depths of the ocean and find an unlikely ally – the King of Atlantis, Namor!