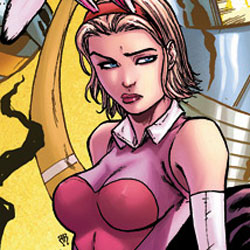 Long before Hack/Slash became all the rage, Tim Seeley was hard at work on Lovebunny and Mr. Hell.  Image Comics has announced it is taking the original black and white series, and re-releasing the book in color.

Seeley shares, “With more and more ‘serious’ superhero comics clogging the shelves, I decided it was time to bring back my first professional creator owned comic. Irreverent, sexy, and funny, Lovebunny and Mr. Hell is to superheroes what Hack/Slash is to horror, and now it’s in full color for the first time!” LOVEBUNNY & MR. HELL: Former sidekick Beth Bowers wants to be her own hero, but she’s saddled with a sidekick of her own: the demonic, eternally hungry Mr. Hell! Long out of print, their twisted adventures return in an all new, volume in full color for the first time! This new edition includes EVERY appearance of LOVEBUNNY & MR. HELL to date, including the HACK/SLASH strips and the crossover with Savage Dragon!