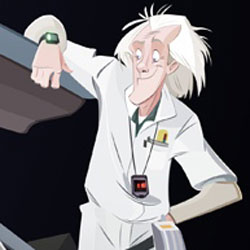 Universal announces Back to the Future licensing deals Just a few more days until Back to the Future turns 25 years old, and it finally looks like we’ll get to see action figures and other toys based on the series.  Global License magazine reports that Universal has created licensing deals with several companies.

Universal actually announced many other deals for other properties, but I don’t think Smokey & the Bandit die-cast vehicles trumps the BTTF news. Or does it?