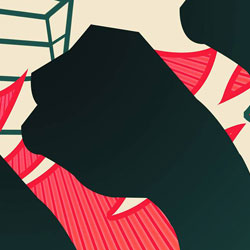 Hush revealed? Batman bleeding? Catwoman… catting? As strange as it may sound, the messed up ending of the previous installment of Batman Beyond actually ends up with a reasonable explanation that still keeps everything in continuity. Previously in Batman Beyond: Someone claiming to be Hush has been running around New Gotham killing his way through Batman villain after Batman villain, seeking to finally depose Bruce Wayne and tear the city down for good. Terry McGinnis thinking he could take down an ancient foe, finds himself stabbed in the gut, bleeding out, with the new Catwoman as the only person who can help him. Meanwhile, Hush’s mask has come off, and he bears a striking resemblance to Dick Grayson. But he’s a good guy, right?

SEND IN THE CLONES

The solution to why Hush looked so much like Dick Grayson last issue, is quickly and easily explained away by Adam Beechen, that we should have all seen the swerve coming. Amanda Waller, knowing that Bruce Wayne would eventually die, reasoned that the city would need a Batman to keep it safe and relatively sane. Following Dick’s disasterous encounter with The Joker, she sent a team of doctors in to scrape his mind and his DNA so Cadmus could create their own clone ready to be activated when the time was right. Turns out the clone had his own agenda, escaping at just the wrong time, thus kicking off the arc.

Now before you call bullshit, decrying Beechen’s plot twist a cheap trick to draw in the masses, keep in mind that the Waller/Batman Heir gimmick actually did play out in the Justice League Unlimited animated series, where it was revealed that Waller used Bruce’s DNA to get Terry McGinnis mom knocked up, thus making Terry Bruce’s biological son. The clone ploy keeps the timeline and continuity of the series in tact as it looks like the clone was simply another in a long line of plans Waller has to keep Batman alive for the ages.

Now that Hush has been revealed to be a real dick, his master plan is even more frightening for the citizens, as Beechen once again taps into Bat-history, bringing back the terror that was Cataclysm. The last issue will no doubt find the seriously injured Terry bringing down the twisted clone, and there’s a better than likely chance the real Dick will get involved in the final take down as well.

There really isn’t anything over the top in this issue, save for the occasional scenery chewing by the clone Grayson. I like it when Bruce finally drops his guard, how quickly he figures out who Catwoman is, and the potential love that blossoms between the cat and the young bat. Beechen has done a good job of letting the characters be themselves, ties back to past and future Batman continuity, and doesn’t stink up the issue.

My biggest complaint about the series so far has to do with the art. I’m still not completely sold on Benjamin’s style, as there are still plenty of pages and panels where characters get a little wonky in their detail and poses. The composition of each panel is nice, and I like the angles selected to move the narrative forward. It would be interesting to see what Benjamin could do if he broke some of his pages out of the traditional panel format, and allowed certain moments to jump out to the reader.

Dustin Nguyen is a real favorite of mine, and his cover is so different from what we’ve seen from him lately, that I had to do a double take when I saw his name. It’s well done, and make a great retro poster, and if I could afford the original piece, I’d snag this cover up in a moment.

You really need to be a Batman Beyond fan, and someone familiar with the Batman’s history over the last 20 years to fully appreciate what is going on in this series. I haven’t given away everything going on in this issue, so the book is still worth a read to see how Hush really ties into all of this, and to see how Bruce gets his hash handed to him when his guard is down. The big reveal works, and the art is okay, earning Batman Beyond #5 3 out of 5 Stars.