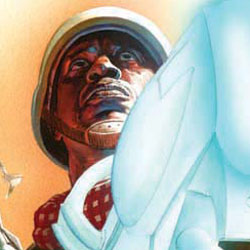 Dynamite Entertainment has announced that Alex Ross will plot, design, and paint the covers to the company’s new Bring the Thunder series.

In Bring the Thunder #1, arriving at comic book stores this December, Wayne Russell is an elite para-rescue jumper in the Air Force serving in Afghanistan.  He leads the most rigorously trained troops on the most dangerous missions into enemy territory.  During a deadly mission, Wayne’s team is ambushed.  Mortally wounded, Wayne finds and fires an experimental weapon, but the weapon malfunctions.  The result will change Wayne and warfare forever.

If I were more hyped up on caffeine and chocolate I would be running around the Major Spoilers office shouting “Oh, Yeah! Bring the Thunder, Baby!” all while doing muscle bound poses, while pretending to hold the weapons we’re teased about in the above description.  This series sounds like a whole lot of blow ’em up fun…

Take the jump for a sneak peek of the first issue.

“Bring the Thunder is about a hot-button superhero for our times,” says Alex Ross.  “An American soldier in Afghanistan is caught in a firefight that exposes him to an experimental weapon that transforms his body into living sound.  His experiences over there resonate in the whole story as he is finding himself transplanted back home to his family after his world is entirely changed. He finds that his new state of being a sonic battery gives him the ability to affect change at a local level.  From fighting gangs in Chicago to insurgents in the mountains of Afghanistan, this hero deals with real dangers that plague the world today.

Bring the Thunder! #1 arrives in December.