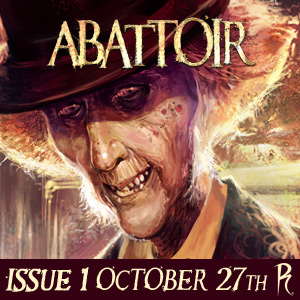 Looking to have your artwork published in a Radical comic? Well, now is your chance! Radical Publishing is pleased to announce a new contest to test your illustration skills. Simply draw your best version of the villainous Jebediah Crone, based on a scene from Radical’s newest horror miniseries, ABATTOIR. For each of the first five issues, Radical will select a winner to be featured on a per issue basis, with 5 winners in total. For a chance to be featured in Abattoir #2, upload and email a link of your Jebediah Crone artwork to promotions@radicalpublishing.com no later than November 10th, 2010. Your illustration MUST be based on a scene of Jebediah Crone as seen in the pages of ABATTOIR #1.

That’s not all. After the release of ABATTOIR #6, Radical will hold a contest for fans to pick the best entry amongst the five individual winners. The winning illustration will then be featured in the ABATTOIR trade paperback collection. Created by director Darren Lynn Bousman (Saw Franchise, Mother’s Day), written by Rob Levin and Troy Peteri and illustrated by Bing Cansino, ABATTOIR #1 goes on sale October 27th, 2010. Taking place shortly after a brutal massacre occurs in a gorgeous house, Real estate agent and family man Richard Ashwalt is assigned the impossible task of picking up the pieces and selling the property. As Richard inspects the blood-soaked grounds, a twisted old man journeys to the house with a sinister and terrifying purpose. Richard is about to be drawn into a web of shadows, murders and massacres that will shatter him to his very core!