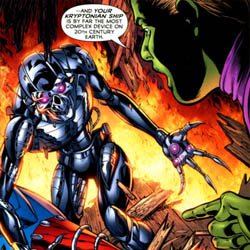 So, with the Legion having their own book again, the first-half (for now, at least) of Adventure Comics is dedicated to tales of the LSH when they were young.  We’ve gotten a couple of real bombshells in the first few issues, and now the LSH is travelling to the PAST to see young Clark Kent in his natural habitat.  Surely this will be an incredibly significant moment for them all, right? Previously, on Adventure Comics:  The earliest adventures of the Legion of Super-Heroes are a tangled chunk of interweaving time-frames, with members joining off-panel, SuperBOY getting recruited 20 years in the subject past, while Supergirl joins earlier in the TEAM’S timelines, later in ours, and MUCH later in her own.  The things we haven’t seen, the moments between the moments, the times where Saturn Girl got liquored up and slept with her teammates, these stories are finally being told.

As for Ray Palmer, The Atom, unfazed by the murder of his protege which he vowed to figure out over in Titans, has witnessed an attack on his father which turns out to be the work of a villainous group called The Colony.  (Not THAT The Colony…)  The whole thing may or may not be the work of his lost Uncle Dave, who, if anything like my friend’s Uncle Dave, means we’re in for some serious right-wing pedagoguery and abusive rhetoric.  This being a superhero comic, I tend to doubt it, but either way, it’s sinister stuff, man.

We open in the hidden corridors of a spacecraft orbiting the planet Rimbor, a celestial hive of scum and villainy, with Chamelon Boy, Invisible Kid and Shrinking Violet embarking on the first-ever mission of the Legion Espionage Squad.  Cham morphs into a very cartoony rat and the threesome leaps into heroic action, undermined somewhat by the sight of Violet in her green minidress astride Wilbur’s pal Templeton.  They’re quickly discovered (which kind of makes you wonder why the Espionage Squad idea ever recurred) while, at the same time, the founding three Legionnaires (Saturn Girl, Cosmic Boy and Lightning Lad, if you’re new here) and Brainiac 5 travel back to meet Superboy in Smallville.  They hang a lampshade on this reverse-visit with Brainiac mumbling something about learning to deal with harsh conditions.  As if on cue, an F-5 tornado appears out of nowhere!

Having dealt with the backlash of discussing Kansas geography for two hours not long ago, I won’t belabor the vagaries of Kansas weather, but suffice to say that this whole sequence exists only to bring back the Silver Age “spin in the opposite direction to disperse the twister” trick,” giving Clark the upper hand, for once, with his cool friends, as this is part of his regular routine.  I have to say I’m a bit offput by the Legion story so far this month, as the art is ever-so-subtlely goofy throughout, which undermines a bit of the drama.  The Espionage Squad gets out of their jam thanks to an awesome moment by Shrinking Violet, and the 20th Century gang is completely out of their element at an old-fashioned barn-raisin’ back in Smallville.  Both stories get a shocking reveal (turns out that BOTH stories feature a surprise antagonist with heavy-duty Silver Age LSH connections) and we see the origin of Brainy’s force-field belt.  We end with the revelation that Brainiac DIDN’T make a mistake when he brought the team back to meet young Clark Kent, he just had an ulterior motive all along.  Cute, but not terribly essential.

Ray Palmer is saved from certain death after last issue’s cliff-hanger by his Uncle Dave (which is, once again, anti-climactic as all hell) and we discover the origins of the Colony, a group of shrinking cannon-fodder bad guys who are willing to DIE for their ends.  (Only Ray and others using his full treament can withstand the pressures of size-changing.  Others EXPLODE.  So, that’s messy…)  Unca Dave drops the bombshell that he is a FOUNDING member of the Colony, but has been trying to work from within to bring down their evil plans.  His masterstroke is a tiny terraformed world inside a tiny silver ball, his safeguard against catastrophe.  In case of Armageddon, he can teleport the entire population into the tiny space until things are once again tenable.  Of course, they go inside the globe, and of course they’re followed, and Ray Palmer ends the issue facing off with faceless shrinking ninjas who think they’re ants.  Or something…

I have to admit that I’ve really had trouble focusing on the Atom backup stories (skipping at least one entirely, due to the sheer drudgery of reading it) in Adventure Comics, so I admit that I probably missed something but…  I’m just not feeling it.  I would have preferred Ray taking even ONE issue to deal with the death of Ryan Choi before launching off into his soul-searching family blah blah blah fishcakes, and the plotline with the Colony feels pretty shopworn to anyone who knows their X-Files.  Mahmud Asrar rocks the pencils throughout the Atom portion, though, making it much more fun to look at than to read.  The opposite problem occurs with the Legion tale, as the stories aren’t bad but the art makes several decisions that undermine the words.  Brainiac 5 looking 9 years old when he meets Ma Kent, young Clark looking for all the world like Harry Potter, and the truly disturbing facial expressions pull my enjoyment down a notch.  When all is said and done, this book does little more than provide additional fillips upon Geoff Johns run in Action Comics and more barnacles on Ray Palmer’s “shrinking super-genius whose also a barbarian folk hero whose wife became a mass-murderer and was posssessed by Eclipso but don’t feel bad for him because he disappears a lot” backstory, leaving me with an overall feeling of, “Oh.”  Adventure Comics #519 is undermined by clashing styles, and while not truly awful, is a sadly below-average reading experience overall, rating 2 out of 5 stars overall, with one 1/2 star awarded solely on the artwork of Asrar.  A few years ago, they tried to launch a series that would tell flashback stories of the original Legion, and now I start to realize why they scuttled it:  It leads to stories that are either silly and dismissable, or meaningful but hard to reconcile with what we already know…

Faithful Spoilerite Question Of The Day:  Given an either/or choice, would you rather read untold tales between the existing issues, or revamped, updated versions of the originals?