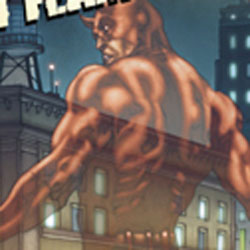 Marvel has released a sneak peek of Black Panther: The Man Without Fear #513 with art from one of our favorite artists – Francesco Francavilla.

BLACK PANTHER: THE MAN WITHOUT FEAR #513 (OCT100586)
BLACK PANTHER: THE MAN WITHOUT FEAR #513 FRANCAVILLA VARIANT (OCT100587)
Written by DAVID LISS
Penciled by FRANCESCO FRANCAVILLA
Cover by SIMONE BIANCHI
Variant Cover by FRANCESCO FRANCAVILLA
he smoke has cleared from the ruins of Shadowland and a new protector of Hell’s Kitchen is on the prowl. His name is T’Challa, the Black Panther! In a city without Daredevil and a dangerous new foe called Vlad the Impaler consolidating power in the underworld, the Black Panther must learn to become a new type of hero. Without his riches, his technology, and his kingdom can T’Challa truly be the Man Without Fear?