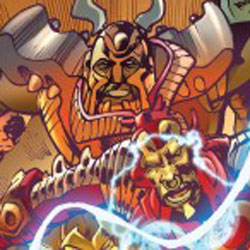 Marvel has released a sneak peek of Chaos War #3 by the team of Greg Pak, Fred Van Lente, and Khoi Pham.  Take the jump to see what the Chaos King plans to do with his undead army.

CHAOS WAR #3 (of 5) (SEP100597)
Written by GREG PAK & FRED VAN LENTE
Penciled by KHOI PHAM
Cover by BRYAN HITCH
All good things must come to end, even the Marvel Universe! The Chaos King has attacked the Earth with his undead army of resurrected super-beings and leading the charge is none other than Ares, God of War! Does Hercules stand a chance against his own half-brother?  Sure, if the new and improved God Squad stand together! But could there be a traitor in their midst?