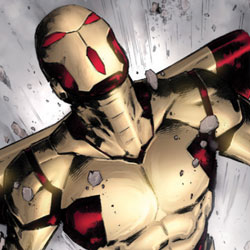 The much hyped Stan Lee/BOOM! Studios teaming kicks off next week with Soldier Zero #1 from Paul Cornell and Javier Pina (under the guidance of Stan Lee). With all the hype surrounding these new titles, does BOOM! knock it out of the park? Do they even make it to first base? Here’s your early review of Soldier Zero #1. Far out in the deepest reaches of space, a ship fires at someone in a weaponized suit. The suit is full of awesome in its design, and while it looks humanoid, there are plenty of moments where an alien influence shows itself. While readers don’t get to see what the suit is fully capable of in this issue, it’s clear the suit can stand up to quite beating – even crashing to Earth and changing everything about Stewart Trautmann’s life.

Stewart is a wheelchair-bound war veteran who is paralyzed from the waist down thanks to a roadside bomb that blew up his transport while he was stationed overseas. Since his return, he’s encountered every kind of uncomfortable situation dealing with his paralysis, from discrimination at the grocery store to his potential future girlfriend wondering if everything below the waist works correctly or not. This issue is full of setup and readers really get to know who Stewart Trautmann is and how drastically his life has changed since returning home. It only make sense then that his life is about to change yet again, when the Soldier Zero suit merges with Stewart and saves him from a perfectly awkward moment.

The wheelchair situation is one of the best and worst parts of this issue. We know Stewart’s in a wheelchair, we understand people are uncomfortable with the situation, but why does Paul Cornell need to constantly beat us over the head with page after page of discussion? Readers understand his plight and frustration by the end of page five, and I felt like there was a lot of overkill.

On the flip side, if Cornell is trying to make people aware of how much our soldiers sacrifice while serving, he hit that home perfectly, and in that way, I don’t think many will mind the extended exposition. And, since we don’t know how bonded the Soldier Zero uniform is with our hero (there is an ominous turn at the end of the issue), the wheelchair angle is perfect way to go, as it is a great cover for someone who is certainly going to be wanted/hunted by whoever was in the spaceship at the beginning of the issue. We’ve seen heroes with disabilities before (Matt Murdock, Freddie Freeman, Charles McNider, and so on), but this may be the best swerve for anyone who might attempt to discover who is beneath the mask.

THE ART OF A SUPERHERO

If you’ve read Superman, then there is a good chance you’ve already seen Javier Pina’s work. I like his composition and layout and I like how he is able to draw strong looking characters without them turning into bulky ‘roided out beefcakes, where every muscle is clearly visible through a loose fitting shirt. Stewart looks like a soldier, there is tension and frustration in his face, yet we can also see kindness and compassion. Love interest Lily isn’t drawn as a tarted up whore, with totally unrealistic proportions; she looks natural – real. The people look like people, and the alien suit, looks like an alien suit, and that is what I like in superhero comics.

The flashback moments are well done, too. Pina changes the shape of the panel and colorist Alfred Rockefeller gives everything a Sepia-tint so we know it is a memory. I also like the special effects added in the issue as BOOM! made the wise choice to avoid overly used lens flares, and instead go for nice glowy bits and design elements that seem alien.

Potentially, there could be a great deal of drama going forward, as the hero who lost his ability to walk suddenly finds he can walk again, and much, much more. The dialogue is a little stiff in places, but nothing that won’t flow better over time as the writer gets more comfortable with these new characters. Stewart is a instantly likable character, and I’m already chomping at the bit to see what happens next – and its the team of Cornell and Pina that make it happen. There are always going to be a few problem spots in any first issue, but I feel the overall issue succeeds regardless. Soldier Zero is instantly familiar, yet also full of the unknown that it is worth checking out when it hits stands, and is deserving of 4 out of 5 Stars.