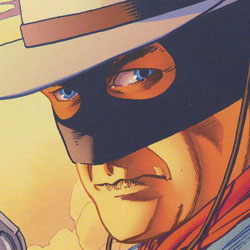 The showdown between The Lone Ranger and the foul Cavendish has lead us to this battle between two forces where only one can walk away victorious. Who will be the champion? Previously in The Lone Ranger: Vowing to avenge the death of his brother and father, John Reid has tracked John Cavendish to a church. Meanwhile, his faithful companion Tonto has fallen in love with John’s sister-in-law and has taken Linda and Dan away from the ruckus to be safe.

NOT THE SMACK DOWN YOU WERE HOPING FOR

This issue is a great character moment for Tonto who returns to his tribe in hope they will accept and protect Linda and Dan. While this issue doesn’t recount why Tonto was a banished from the tribe, the return has caused quite a bit of turmoil among the warriors. While the tension doesn’t build to a fight between warriors, the quite moment between Tonto and the elder woman leader is well done, though it does feel very touchy feely, almost like it was lifted from a Disney movie, or the only quiet exchange between characters in The Golden Child. It isn’t totally hokey, but the schmaltz is really thick.

Unfortunately, the exchange between Cavendish and John is not as thrilling as I had hoped. John does a bit of punching, and Cavendish prattles on claiming The Lone Ranger is no better than he is, before whipping out a sword and stabbing John. Matthews does build some tension in the scene, and it works well, but for a series that is released every other month, I was really disappointed the big fight is being stretched to yet another issue. At the rate things are progressing, I half expect it to be 2012 before the conclusion to this story arc is complete. And that is the most frustrating aspect of the issue – the story is fine, the plotting is well done – if this was a monthly book.

THE ART OF THE OLD WEST

Cariello once again delivers fantastic art for a series set in the barrens of West Texas. When John takes off his mask and reveals himself to Cavendish, I like how the shading eventually has the face hidden and in a few panels, half the face is “masked” to enhance Cavendish’s argument that perhaps the Ranger is split between what is right and what is revenge.

Still, there are some problematic areas, and it is the same complaint I’ve had about many other artists and colorists; instead of providing a detailed background, or even resemblance of a background, panels are filled with color washes that are meant to simulate a completely blurred background.

Ever since picking up the first collected Lone Ranger trade, I’ve been hooked on the tale of the Ranger and his faithful companion. But now that I’m onto the single issues, and release schedule has been pushed to every other month, this particular story arc crawls forward at a snail’s pace. To make matters worse, this arc really isn’t doing it for me in the grand scheme of things. While I’ll still root for the heroes, and hiss at the big bad, this issue is a take it or leave it issue for me, earning 2 out of 5 Stars.