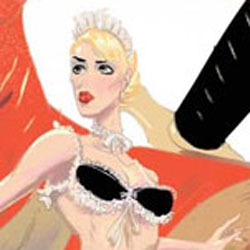 Deadpool has been brought out of retirement in order to eliminate Hammerhead, the Maggia crimelord who has been in self-imposed isolation. Secluded within the heavily fortified office building known as The Tower, nothing gets in or out without Hammerhead’s distinguished associates catching wind of it. Well, except for perhaps the world’s greatest assassin, our very own Merc With a Mouth, Deadpool. Bob, The Not So Happy or Lucky Sidekick Is Back

Bob is having a rough time of it lately. Longtime fans of Deadpool will recognize Bob by name but certainly not by action. Let’s be clear: this is not Deadpool’s happy-go-lucky pal that has appeared recently as a goofy sidekick in a pirate outfit. The Marvel Max version of Bob is now working for an unnamed governmental organization and his assignment is simple. Action Officer Bob is tasked with the unenviable position of being Deadpool’s handler. In the grand hierarchy of the organization, Wade is the perfect killing machine and poor Bob is just perfectly expendable.

Writer David Lapham is out to show us that he’s even more twisted than Garth Ennis, and that’s saying a lot. First Lapham ups the shock ante by following up Ennis’ Crossed with his very own Crossed: Family Values. Now another Marvel character with a penchant for killing is taking on the mob in his own Max title. Ennis followed a similar path with his legendary adult take on Frank Castle in the Punisher universe. This time Lapham takes a page from the same gore-infested, kink-glazed book of depravity.
Frankly, I can’t get enough.

Kyle Baker’s unique visuals add to the dark and twisted charm of the book. His doughy depictions of anatomy mirror the outrageous nature of the tale. Baker has shown himself to be one of the most adaptive illustrators in comics. When coupled with the appropriate source material, Baker’s art can act as the perfect complement. His style within these pages reminds me of Paul Pope, Tim Sale and some Darwyn Cooke thrown into the mix.

If you maintain delicate sensibilities, I suggest you steer far from this book. Leave a wide birth in the comic aisle of your LCS, otherwise you may get caught in the wake of its wonderful smuttiness. As a point of reference, you really won’t believe the punishment that Bob endures in order to make his assignment a success. Talk about dedication to one’s craft!

With the ongoing deluge of Deadpool-related titles, Marvel is pushing the boundaries of overexposure. I can’t help but think that Lapham’s take will prove to be quite polarizing. Boundaries are certainly crossed and good taste is given a provocative poke in this unusual and entertaining series launch.

Any comic that has one of our protagonists nearly killed over crumpets gets my vote of confidence. Deadpool Max #1 earns an anything but respectable 4.5 out of 5 stars.