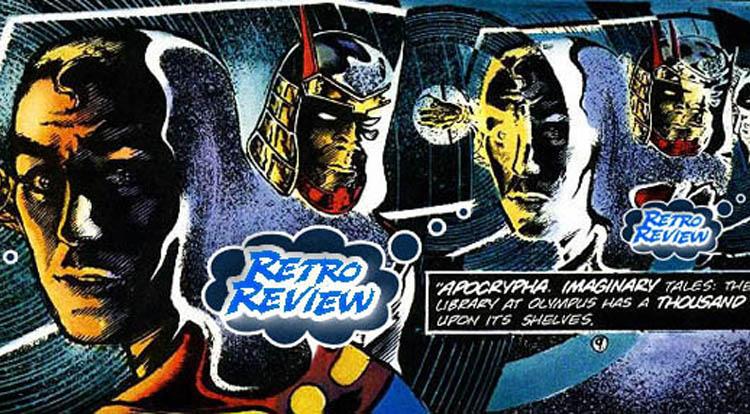 **Please note that today’s Retro Review is not for the faint of heart or the easily offended, and images may be considered NSFW.  Those who are sensitive to depictions of  violence should  NOT click the link.**

Day 2 of Anniversary Week, and we continue our look at stories that have great power and meaning for me.  If you listen to the Major Spoilers Podcast, you know I talk a lot about things my Grandfather may or may not have actually said.  On occasion, though, I have to divert to the wisdom of my late Grandmother, a teacher for 70-odd years.  Gramma used to say, “scratch a critic and find a failed writer. ” While what I do is probably only criticism in the loosest sense of the word, there might be a grain of truth to that truism for me.  One of the major reasons why I never seriously pursued a career in comic book writing was the existence of Alan Moore.  When I first read his Swamp Thing issues in 1980-whichever, I was so stunned as to wonder why I even bothered with my scrawlings in the first place, so powerful and evocative is his writing.  Moore’s 80’s work seemed determined to assess and deconstruct every aspect of comics and the superhero and Miracleman is still (in my mind, anyway) his magnum opus.  He took issue with such comic tropes as the secret identity, the evil scientist, the relationship between man and superman, all against the Cold War nuclear panic backdrop of the 1980s.

With issue #15, Moore seemingly decided to completely recreate that staple of comic books, the fight scene.  The resulting issue is one of the most compelling and HORRIFYING comic books ever put to paper, and one of the crown jewels of my collection… Previously, on Miracleman: Micky Moran’s story has a very familiar ring to it.  A young reporter encounters a strange old man who teaches him a magic word that transforms him into an older superhuman version of himself, which sounds remarkably familiar to the origin of Fawcett Comics’ Captain Marvel.  (It should, as Miracleman’s genesis was as Marvelman, a character created for British reprints when Captain Marvel himself stopped publishing due to DC’s copyright lawsuit terms.)  The old man, though, was an astrophysicist rather than a wizard, and the word was “Kimota” (Atomic spelled backwards, ostensibly) rather than “Shazam.”  And, of course, there’s the fact that it’s all bull$#!+.

Micky and his proteges Young Miracleman and Kid Miracleman were the end results of a military experiment created by a genius named Gargunza, and they were all attacked with a nuclear weapon (!!) when their usefulness ran out.  Having returned to being in the 1980s, Miracleman is at first gratified to see his old pal Kid Miracleman all grown up, but soon finds that little Johnny Bates spent 30 years in his superhuman state, becoming more and more psychotic and evil as he went.  Their first battle ended with a miraculous (no pun intended) win for MM, as his kid sidekick accidentally returned to his human form after 3 decades.  A chance encounter with bullies caused little Johnny to use his magic word again, and ran roughshod over the city of London while Miracleman was away.  The sheer horror and power of this situation comes clear with the first view of Johnny  Bates, perfectly comfortable amid the carnage that he has created, waiting for his former mentor to return… Wanna know what’s really amazing about this issue?  Senseless violence, including some pretty obvious violence against children, but I’m too caught up in the story being told for my Berzerk Button to engage.  That’s craft, Faithful Spoilerites.  John Totleben first caught my eye as the penciller of Swamp Thing, but his work here is truly visionary (in an awful, terrible, apocalyptic sense) showing what might happen if someone with nigh-infinite power really went mad and began destroying things.  We’re treated to images of human skins drying on clotheslines, people stacked artistically and impaled on buildings for decorative purposes…  It’s a truly monstrous introduction to what Bates is capable of.  Miracleman and his allies are stunned at the sight of Bates’ handiwork.  By this point in the series, Moore’s Miracleman has begun referring to himself as God, speaking of his infallibility and omniscience, but even he is affected.  Moore’s internal monologue for the character is simply amazing… “Really… What MUST one do to get attention around here?” crows the former Kid Miracleman as the others attack, confirming his status as pure evil.  The real masterstroke, though, is that in issues just previous, I felt SORRY for him, being abused and hazed in a boy’s school.  When he spoke the word to save himself from an assault, part of me cheered for Bates overcoming his attackers.  And then he murdered them all in disgusting and innovative ways.  Moore made me feel for a nasty little bastard and then made his true colors even more vivid and awful than anything I’d ever seen.  As the battle continues, Miracleman begins to describe how the battle has become legend, that apocryphal tales of what happened that day have sprung up, and then begins telling us THOSE stories… Interestingly, in one of the earliest appearance of the character (as Marvelman, mind you) back in Warrior comics, he was attacked on the moon by his future self and a Warpsmith, claiming that a terrible battle was happening in the future.  The way it’s structured here, though, it’s unclear whether Moore (or indeed Miracleman) is verifying that tale as here, or dismissing it as apocrypha itself.  “How baroque these myths,” indeed.  Half a dozen more explanations are given as well, the upshot of all being that Miracleman returned with enough power to challenge Bates on his own terms, and the two supermen begin a physical battle that returns to the center of London.  Those of you who heard Stephen’s recent discussion on a podcast about casualties of superhuman fights should know that I kept wanting to reference this issue, but forgot.  Either way, it becomes clear that the line between Bates and Moran isn’t so much one of morality as it is one of degree. It’s actually the Warpsmith (another Moore creation from Warrior Magazine, where his take on Marvelman first appeared) who strikes the successful blow on Kid Miracleman, teleportin rubble into his brain and heart (!!) and forcing him to save himself by transforming back into Johnny Bates, a squishy little 13-year-old boy whose mind hides a monster.  Miracleman uncharacteristically reaches out to comfort the boy, and then… …yeah.  Oh.  My.  Gawd.  The sheer happiness on little Johnny’s face in that last panel is heartbreakingly pathetic, and the first time I read the issue, I simply COULD NOT believe what had just happened in the issue.  The hero is left weeping, cradling the broken body of a barely teenage boy, in the midst of a completely devastated London.  The city is actually never rebuilt, serving as a permanent memorial to the millions murdered by Johnny Bates that day, and Miracleman ends up building his castle in the ruins and then TAKING OVER THE WORLD because he believed that no one else was fit to rule.  Let’s look at that sentence again:  In order (partly) to keep something like London from happening again, Miracleman set himself up as the (mostly) benevolent dictator of the entire world.  Imagine Clark Kent or Mar-Vell trying that one in their respective realities for a second…  Yeah, I didn’t think so.

The most amazing thing about this issue is that Miracleman the series doesn’t really HAVE a lot of giant fisticuff battles, instead focusing on what the superhuman in their midst really means, and in one case spending most of an issue witnessing the birth of Miracleman and Liz Moran’s child.  Neil Gaiman would take over the series an issue or two later, and send it off in another, more esoteric direction, but Moore’s sixteen issues of the book represent as realistic a portrayal of superhumans as I’d ever read at the time.  Even Doctor Manhattan doesn’t go to the extremes that Miracleman does, yet none of his actions ever seem terribly unreasonable at the time, even his extreme sanction of the mad Kid Miracleman.  It’s really sad that routine and petty legal squabbles have kept this remarkable book from ever being completed (or, indeed, reprinted) for so long that many Spoilerites profess that they don’t understand what made the damn thing so interesting.  Short form?  Miracleman strikes that elusive balance between superheroes and the real world that comics like “Shadowland” and “Return Of Bruce Wayne” strive to create, showing us a recognizable “real world” where the guy in the funny suit doesn’t embarass us.  Miracleman #15 is the total package, and has forced me to do the unthinkable, breakin the scale and earning 6 out of 5 stars overall…  (At least until Stephen tells me to change it.)

Faithful Spoilerite Question Of The Day: How many of you have ever actually gotten to SEE an issue of Miracleman?  (Otter Disaster doesn’t count, as he bought issue #1 and 2 straight out of a dollar bin back in the day, if I recall correctly…)